I hope 2015 has been going swimmingly well for you so far. My awesome foursome has been back in Brisbane for almost 2 months now. Not much has changed, in that I’m still busy tending to hearth and home while HRH goes hunting for the bacon, but we now make it a point to spend more time at home because “the boy” (that’s what we call him apart from “the baby”) will not allow us to go anywhere without chasing after him. Literally.

Amanda, who has always relished her role as “big sister”, keeps asking if she can bring him to school for “show and tell” – reasoning that if other kids can bring in their dogs to do what she calls “show off”, then she should be able to bring in her brother – except that in Year 5, they no longer have such a thing. I know! How can they NOT have show and tell??? It’s like Mcdees not selling burgers and fries!

Anyhow, I’m happy to report that Amanda is excelling at school. Her class teacher, Ms Carolyn, inspires  her to do her best and believes in her (almost) more than I do! Using various online resources, Ms C has been able to provide Amanda with the extension she needs in all areas. Looking back, I can see that her constant daydreaming in class was a symptom of boredom, which in turn led to underachievement.

That’s not to say we didn’t have great teachers at Nedlands Primary. We had Mrs Bray who advised that Amanda was off with the fairies every time she dished out work and was worried she’d get lost in a class of 35, and we had Mrs Sahai who taught Amanda to believe in herself and her abilities and kept at bay the bullies who picked on my little girl 17 times last year. Yes, 17 times! One particularly dimwitted creature who shall remain nameless, tried to drown Amanda at the end of Year 3. Bullying is rife at Rosalie Primary, number 1 primary school in Perth, too from what I hear.

Thank God for Ms Amy of the Dalkeith Kumon Centre who used to tear up Amanda’s work when it was subpar! I’m sure she hears it all the time but Kumon transformed Amanda’s life. I’ve now passed the mantle of Kumon instruction on to Ms Jasmin of the Annerley Kumon Centre, who shares Amanda’s aspiration to be a Kumon completer. What does this mean? Finishing high school maths by next year. Ms Jasmin of the Annerley Kumon Centre tells me that after completing high school maths, Amanda can even continue with University-level Maths through Kumon.

This might read like a paid advertisement for Kumon but I assure you it isn’t. Just 2 years ago you wouldn’t have picked Amanda for a top student. Last week Amanda was 1 of 200 kids from around Brisbane chosen for the Brisbane City Cluster High Achievers Program, which extends and accelerates Year 5 & 6 kids in one of the following areas: Maths, Science, English, Information Technology, Visual Art and Business. Kids are nominated by their teachers based on their results on a PAT-M test and demonstrable literary and numeracy proficiency and selected for the program of their choice based on merit. I’m pleased as punch, prancing about like a peacock out to woo peahens to announce that Amanda was given her first choice of Mathematics through which she will be building a robot, programming the “intelligence” for said robot, culminating in a test to get the robot to perform a set task.

Here’s a picture of Amanda with the offer letter from the Brisbane City Cluster Academic Alliance: 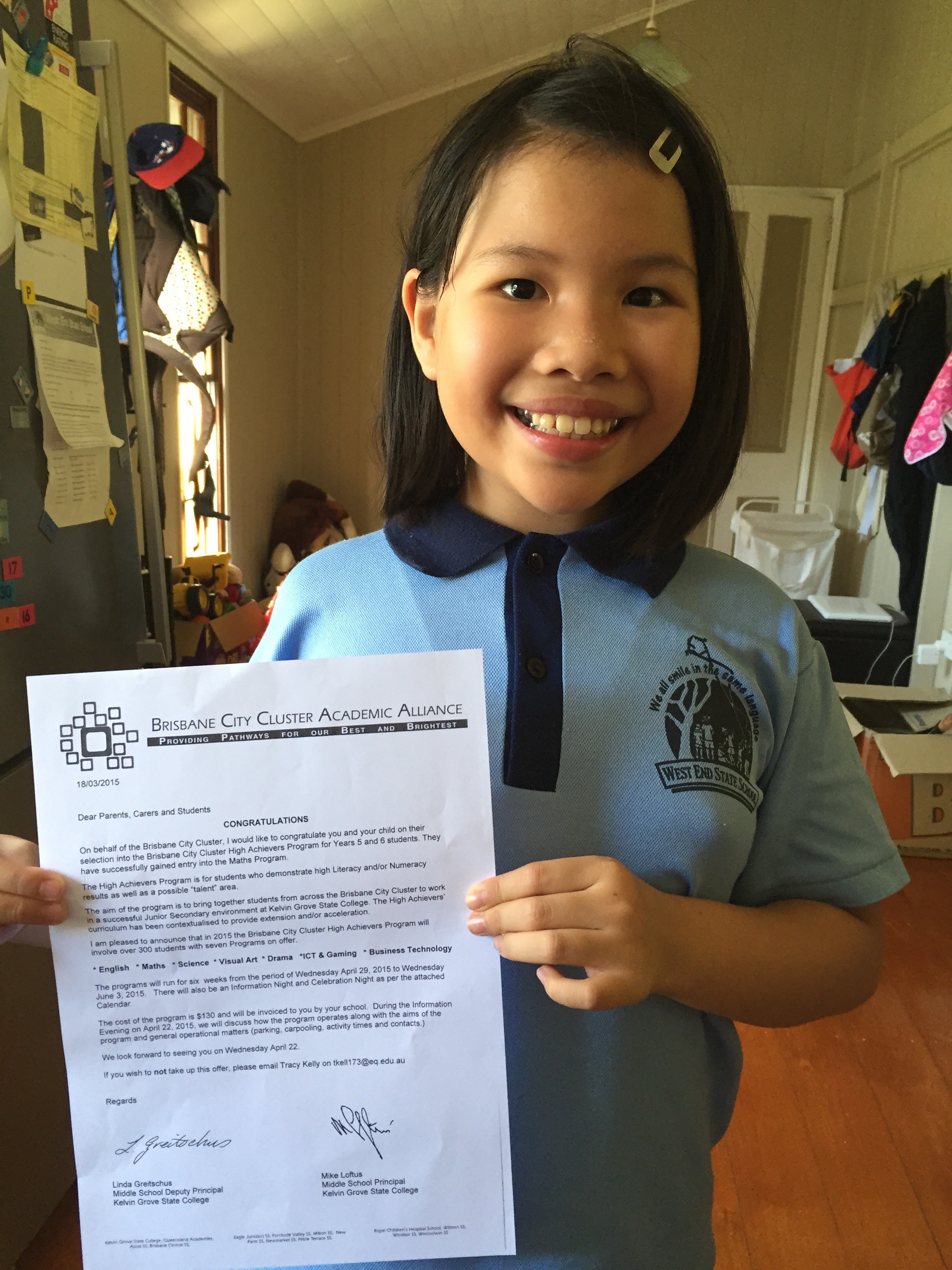 A picture of Amanda with her offer letter.

Other than that, I’ve been busy scheming, plotting and planning for what can only be likened to a brain transplant for a geriatric; saving up for a total overhaul of this 90 y.o. wooden box I call home. I hope to give the old gal a new lease on life but due to her advanced age, this transplant won’t come cheap. Hence my frequent visits to the utterly informative home owners forum that is whirlpool. A lot of the info may be years old but there’s much to learn from there. It is my fervent wish that, regardless of whether I know you in person or not, have a close relationship with you or otherwise, that you  take away something from reading my many posts. Maybe it might help you resolve to actively parent your child (as opposed to allowing the media and society to do that for you), may be it might inspire you to investigate other ways of living or simply being. Keeping this blog, apart from enabling me to engage in meaningful continuous discourse (that fits around my life), has allowed me to reflect not just on the people and events that populate my life but those that shape it. Thank you for continuing this journey into wonderment with me.