Good people of the world, I have a very important announcement to make: after what seems like a lifetime in child-rearing years (9 precisely, next Australia Day) I’m going to give my singleton, Amanda, a sibling. Yes, you read right. I’ve got a bun in the oven that’s due this Christmas. It’s a boy. And yes, I’ve been teased about hogging all the public holidays – as though one can time these things.

I shared the news with my facebook friends this Monday and everyone was extremely congratulatory. After all, 9 years in anyone’s book is a long, long, Rapunzel-please-let-down-golden-hair long time. The question hovering on everyone’s lips, but which none were rude enough to ask, at least not openly, is “Is this baby the result of an accident“?

I can emphatically say No. This is very much a planned baby, one whose journey into being has been marked by way more concerns than Amanda’s (it has a lot to do with me being much older), whose very arrival has been anticipated by HRH’s clan (yes, I don’t mean family) for roughly 2 decades. HRH, who you might remember me saying is Chinese-school-educated, is a second son of a second son whose clan adhere to the tradition of giving all males a “generation name” from a typically 40 character “family poem”; a once flourishing practise that today is followed only by the most traditional of Chinese families. With HRH’s brother and male cousins all having resisted marriage, this boy is his paternal great grandfather’s only male descendant to go forth into the future, a living symbol of the clan’s continuity.

Although his English name Ethan Alexander was chosen by HRH, his Chinese name Tzetan (pronounced “Certain”) was picked out at the time of HRH’s mother’s death from bowel cancer, some 18 years ago, etched on her tombstone as a promise to perpetuate her lineage, since dying without descendants is very bad for a Chinese person. Amanda’s Chinese name is there too, but as we are a sexist, ageist and dare I say, racist, people (that’s just being honest), use of her name was optional whereas this boy’s is not. There is one other male name there but I’ve already informed HRH I’m shutting down the baby factory after this. In more ways than one, this has been a difficult pregnancy for me and even HRH agrees that my body might not be able to cope with another.

In the first 4 months, I had horrible “night sickness” and was constantly fatigued. For a meat-eater, I couldn’t stand the smell, much less taste of meat, and had terrible sleep, which left me even more run down than what I already was. At the 12 week mark, I went for the obligatory blood test and ultrasound to determine the health and development of the baby. I walked in to the doctors’ rooms with roughly a 1:300 chance of having a baby with down syndrome, I left with 1:83. I was told that this put me in the high-risk category.

Even though I knew that in no way had I contributed to those odds, I was distraught and devastated all the same. I opted to have my blood extracted (from my arm) at a cost of AUD1250 (with zero subsidy or reimbursement from my medical insurer or the government) and flown to the US for the Verifi Prenatal test that’s just been recently offered to expectant mums in Australia.

A close friend of mine on being told the news commented that, “It’s good to have money.”

I replied, “Money doesn’t change the outcome of the test. All I’m buying is information.”

I would have much rather not gone through the angst of being told my high-risk as I walked around with lead balls in the pit of my stomach for the next 3 weeks – it ended when I received a call from my doctor with results from the test. 99.9% accurate, I was told the baby is healthy, normal and well, a boy. I was so rapt at the news I quite forgot HRH’s and my desire for another girl. Yes, we are strange Chinese. Most people would think we’d want a boy but he and I actually wanted a second daughter because we are so enamoured by our first.

Throughout this pregnancy, we’ve consistently said to Amanda, “The only reason we want another child is because you’re fabulous. You’ve made us very happy just by being yourself and we want to give you someone for when we are dead and gone.”

Amanda had the mother of all melt-downs when she was first told. I was so upset by her reaction that I had to leave the room while HRH placated her. With weeks to go until D-Day, Amanda has not only come around to having a sibling, she’s actually looking forward to it. She’s already talking about the games she’ll play with her brother when he is old enough.

In my second trimester, the nausea subsided and my energy returned, but so too did my appetite with a vengeance. At this point I could out-eat even HRH who is 6ft 1 inches tall. Where he ate just the 1 Vietnamese roll, I had 3. Suddenly Australia portions were just the right size. I could wolf down a typical main meal and still have space leftover for desert. Predictably I gained weight at an alarming rate of 1 kg a week. My back began to kill me and I had to see a physiotherapist at the hospital, who kindly undid the knots in my back, kitted me out with tubi grip and taught me some exercises.

Around 26 weeks, I went for a Glucose Tolerance Test. I didn’t expect to have any problems since I guzzled 5 litres of Ribena a day while carrying Amanda and was perfectly fine. That, on top of the requisite Boston Bun for breakfast. This time around, apart from the vast quantities of food I was consuming, my diet was a lot better. The midwives I was now seeing told me that under new guidelines, I had gestational diabetes. One of the hospital’s dieticians rang me and we went over my diet. Without my realising it, I was eating enough carbs for the whole Australian army.

At 28 weeks, I looked like I was 32 weeks along. At 32 weeks, I looked like I was due. Thankfully on my new “diabetes-friendly diet” my weight, 20 kg more than when I fell pregnant, has stalled. Another mother from school, also due about the same time and in the same “no-sugar boat” as myself, and I started to go for walks after school drop off.  We formed ourselves a “Diabetes Club”, the purpose of which serves to spur us on to eat within the recommended guidelines while still allowing us to enjoy the foods we love. In the weeks since, we’ve both controlled our blood sugar while partaking in such delicious meals as Seafood TomYam soup, Kerabu Tanghoon (Peranakan Green Bean Noodle Salad), Soto Ayam ( Indonesian Chicken Soup),  Tekwan (Palembang Fish Ball Soup), Yam Woon Sen (Thai Glass Noodle Salad) and so on and so forth. 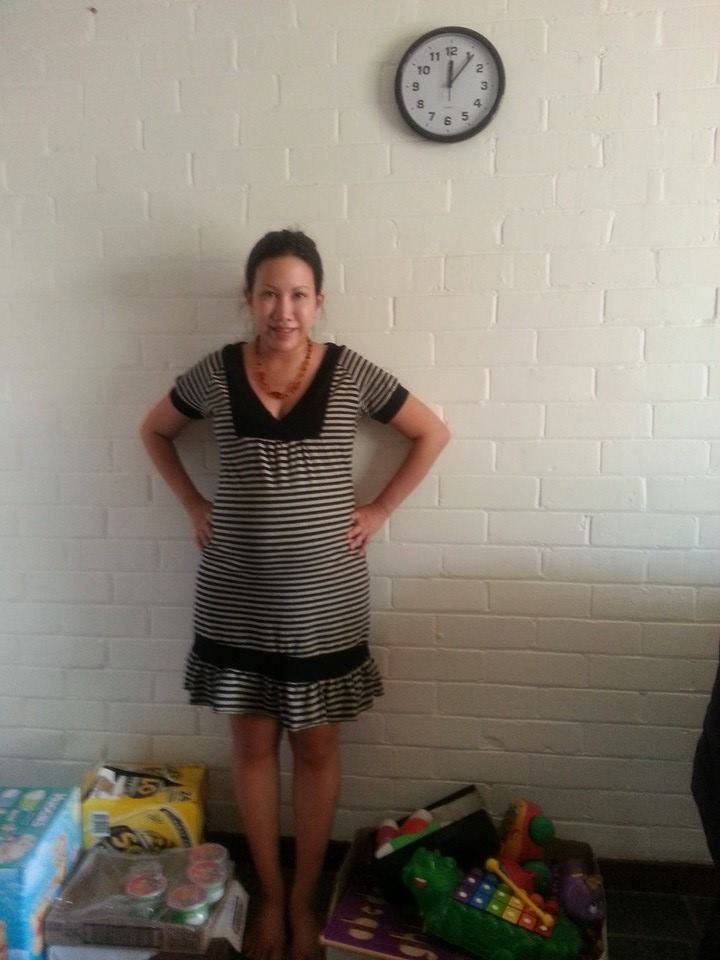 A picture of me 35 weeks pregnant.

Now in my third trimester, my water-retention is so bad that my toes resemble sausages and my neck has all but disappeared into my puffy face and shoulders. The skin feels tight and somedays, I can’t bend any of the fingers in my right hand, which, along with the left, has been afflicted by carpal tunnel syndrome. Sleep is sort of a hit and miss affair, with me no longer needing PJs since I am 5 or more degrees warmer than everyone else. I have been sleeping on my side since 25 weeks as on my back, I simply can’t breathe. The fatigue has returned and with it, pain in the pelvis and knees.

So there we are, folks. Soon enough my parents will be here to help me through the period post-birth. Like with Amanda, I will be observing the traditional Chinese practise of “confinement”, which lasts for a whole month. During this time I will be fed a special diet, mostly consisting of copious amounts of ginger with protein, and won’t be allowed to bathe or go out of the house. Don’t fear for me: I’ve already bought myself 2 cans of Klorane dry shampoo to manage.

So if you don’t hear from me for the next couple of months, you know what I’m up to. If this is to be my last post for the year, I wish you a Merry Christmas and a very Happy New Year! May we meet again in 2014!