My good friends Paul and Tania had me, His Royal Highness and Amanda over for dinner again last night. They also invited mutual friends Brian and Borjana, but since Borjana was busy studying for her surgical exams, only Brian turned up with their baby, Walter.

Like me, Brian too is subjected to long periods of parenting solo, so he was full of congratulations for His Royal Highness’ recent examination triumph. Families such as ours, with  a member in speciality-training, regularly commiserate with each other because unlike other Aussie families, ours has no weekends off or state sanctioned public holidays to punctuate the monotony of everyday living.

Now that His Royal Highness has finished training, I see a little more of him than I used to, but he’s still not the type who clocks off work at five or six in the evening or, given a surgeon’s lifestyle, will he ever be. Since he’s passed, he’s been paying it forward by helping other colleagues prepare for the surgical selection interviews. It’s a tradition of tutoring the juniors the medical establishment have and it is one he happy to perpetuate.

Without a permanent anaesthesiology position, Paul has been locuming since his return from the UK. Tania and I always joke that  he must have been a Chinaman in his last life because he’s the only person we know who can buy 2 laptops – new ones – for $600! I told Tania that if Paul ever tires of medicine, he can always be a businessman because he has a good nose for a bargain. Once he haggled with a Mitsubishi dealer so much that Tania was asked to take him away!

His latest bargain purchase, other than the laptops, was a carton full of Sangria, which he plied me with yesterday. A mix of white wine and fruit juice, Sangria used to be Tania’s favourite but she’s gone off it.

As we waited for Paul to get the barbie going, Tania regaled me with tales of West End before the area cleaned up. Apparently, there was a time when the area was infested with drug addicts and peddlers. Even their neighbour, now deceased, was into selling the white stuff. “Cops used to pull up outside our house all the time,” she said.

“That’s probably how you got the house so cheap,” laughed His Royal Highness.

“We used to find all these needles in our back garden. Our neighbour, Mr Bui, would  allow his customers to shoot up and toss their needles over. Then the cops would come and we’d hear shooting.”

“Oh, how totally exciting,” I squealed. “If only Mr Bui was still alive, I’d have more thrilling stories to blog about. My entries would read like Underbelly crossed with Bikie Gangs.”

“Yeah, and Mr Bui used to chase Mrs Bui all around the house and their big dog would chase him. So we’d have Mrs Bui followed by Mr Bui followed by a big dog! And every time he chased her she screamed like he was going to kill her.”

“Are you sure they weren’t just playing? Maybe those screams mean something else in Vietnamese.”

“No, we were certain he was going to kill her. Then all of sudden it’d go quiet and we’d think, She’s definitely dead now. She was one of those ladies who wore tonnes of mascara and stuff. Now she’s looking a whole lot better.”

I laughed, then Tania and I exchanged knowing looks, before chiming in unison, “Must be a new boyfriend!” 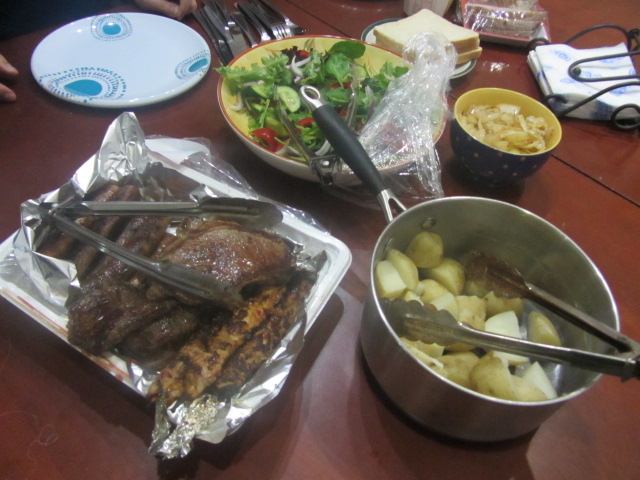 One thought on “Dinner with Paul and Tania includes a West End history lesson.”