As you may have gleaned from By Estella Dot Com’s facebook page, I’ve been away for awhile. Two Fridays before, I was visited by a friend from my first secondary school – ’tis such a difficulty keeping track of where I’ve been – so I took the day off. The day after that, my family of 3 made the 4 hour trip north to Hervey Bay, home to whales and other protected sea creatures, to spend the long-weekend with my good friend Tania and her family. The following Monday was the Queen’s second birthday of the year. Although on the verge of becoming a Republic more than a decade ago, Australia is still a constitutional monarchy, hence the holiday.

We had no complains as we all love holidays. The only bit that His Royal Highness found puzzling was the reason for our trip.

“But the only animals that Chinese view are those they eat,” he said.

Think of the fishies and what-nots in the tanks of most Chinese restaurants. We, Chinese, can’t go near an animal without thinking what it might taste like steamed, poached, braised or twice-fried. Instead of contenting themselves with lentils and cheese, our vegetarians have their gluten shaped into animal parts, so I’d argue that the urge to eat animals is very much hardwired into us. For special occasions, we eat an assortment of animals. 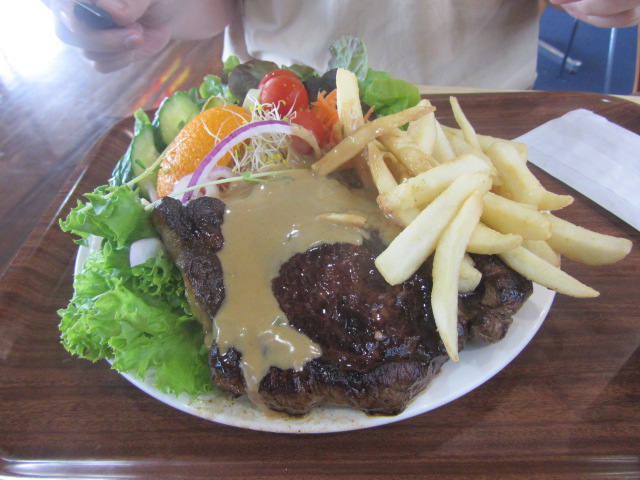 Who knew you could get such a great piece of steak at a servo? Perfectly cooked and delightfully marbled beef rump steak for roughly $16 at Matilda in Kybong, Queensland.

As we neared the end of our journey, I said to His Royal Highness, “If you don’t want to see the whales, we can always hang out at the beach.”

By that time, we were fixated on another animal. We had driven past 2 signs saying “Golden Chicken.”

“Why do you think there are so many people there?” His Royal Highness asked me.

“I don’t know but Tania is expecting us for dinner.”

From our many dinners together, I knew that Tania served dinner at about 6pm. It was already 5.30pm. Golden Chicken would have to wait until the next day.

As though foreseeing our fixation with the last 2 signs we saw on our way up, Tania had chosen to roast a chicken for our dinner. She served us a quarter each with roast root vegetables on the side. In true Aussie style, we washed it all down with wine. Then we went to bed.

The next morning, with Tania and her eldest girl on their bikes and His Royal Highness, Amanda and Tania’s two other girls in our car, we made for the Urangan Pier where they have a weekly Sunday market. Coming from the big smoke down south, there wasn’t much for us to buy, apart from freshly caught and cooked prawns, crusted in coconut, and a couple of shell-made souvenirs for the kids. 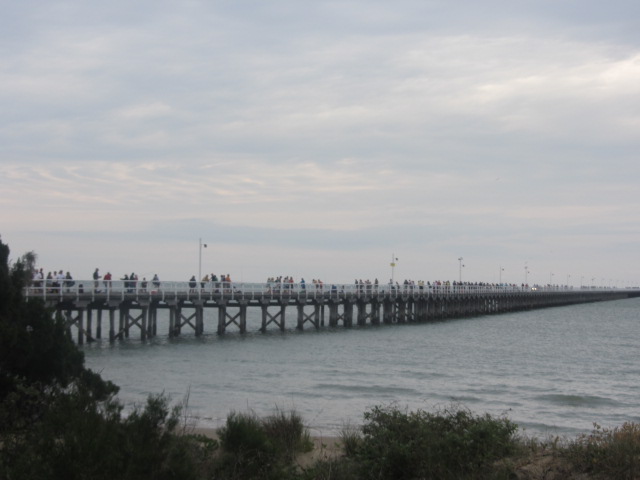 A return walk is 1.8km on the Urangan Pier. That amounted to our exercise for the day. 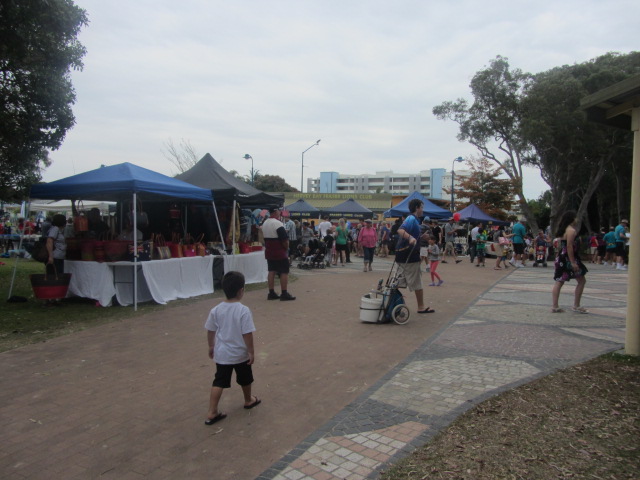 A picture of the Sunday Market at the Urangan Pier in Hervey Bay, Queensland. 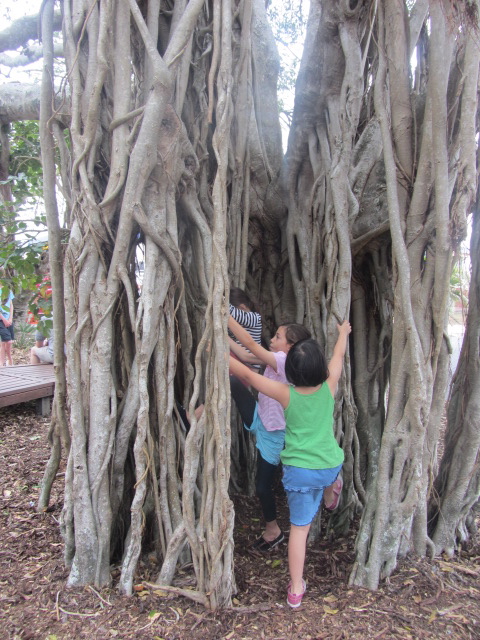 Who says only boys climb trees? A picture of the kids climbing an old banyan tree at the Urangan Pier in Hervey Bay, Queensland. 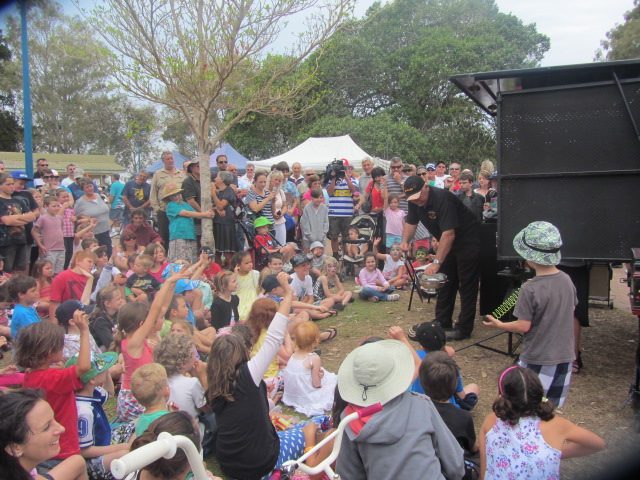 A picture of a stall-holder performing magic tricks at the Urangan Pier in Hervey Bay, Queensland. 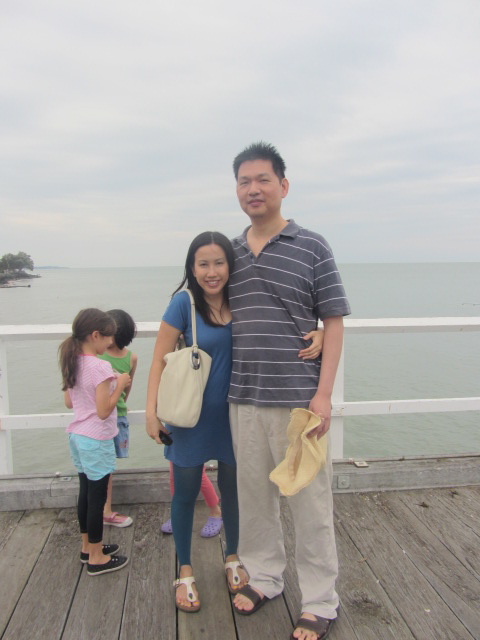 Could barely open my eyes there. A picture of HRH and I on the Urangan Pier in Hervey Bay, Queensland. 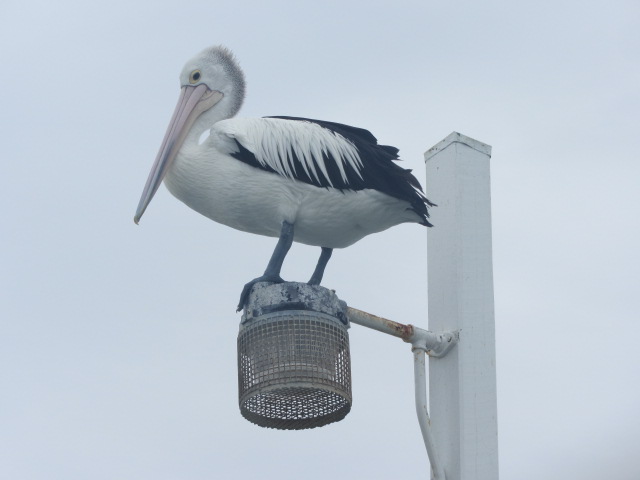 Hhmmm…that will go well with sweet and sour sauce. A picture of an ibis standing atop a lamp post on the Urangan Pier in Hervey Bay. 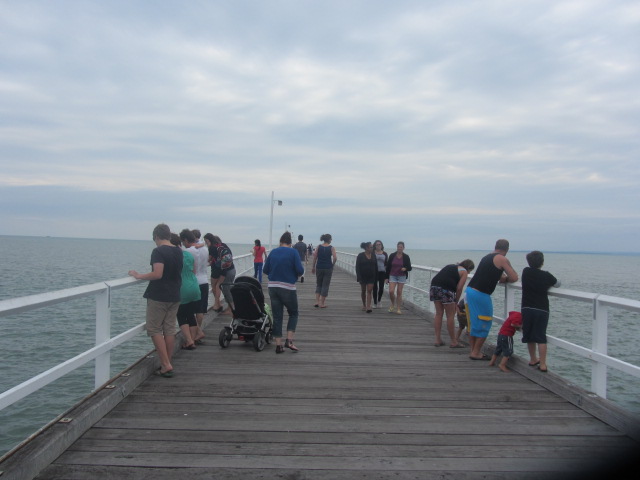 A picture of the Urangan Pier at Hervey Bay, Queensland. 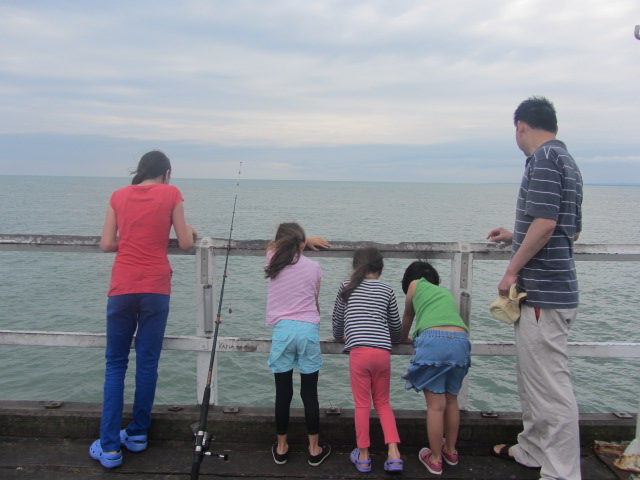 Looking for jellyfish, a Chinese delicacy.

After a stroll to the end of the pier and back, we adults sat on the grass while the kids had 3 rides each at the small fair set up at the end of the market. Emboldened by company, my normally sedentary child went down the gigantic blow-up slide 15 times! After that, we all adjourned to the “Golden Chicken” for lunch; where else?

The “Golden Chicken” turned out to be Hervey Bay’s version of Red Rooster, a place selling the traditional roast chicken dinner with mash, peas and corn on the side and fish and chip packs to the hungry. For $37, we got ourselves 10 pieces of crumbed whiting, 1 large box of chips, 8 BBQ chicken wings, and 2 bottles of soft drink. What a steal! No wonder the place is so popular.

We hopped back into our car and circumnavigated Hervey Bay before going back to Tania’s place. She had already rode home after lunch with her eldest. When we arrived, she was out shopping for dinner. Since lunch was sitting heavily in our stomachs, His Royal Highness and I adjourned to our room for a long siesta.

When we awoke, the house was filled with the smell of Tania’s beef stew, bubbling away on the stove. I enjoyed the stew so much I had leftovers for breakfast, after which Paul led us to some beach near their place.

With the kids in Paul’s dinghy, Tania went through the day’s newspapers while His Royal Highness and I stared out to sea. Soon we were joined by the smell cooking bacon from the people using the public BBQ facilities behind the thicket at the back of us. Briefly it reminded me of those whales we had come to see. Fortunately for the whales, we had to leave that very afternoon as I was due to fly off to Cairns at 6.10 the next morning. 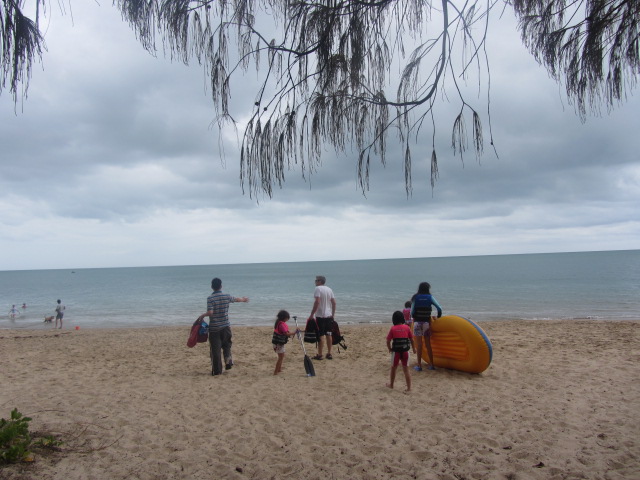 Another lovely day in Queensland, made better with the smell of cooking bacon. 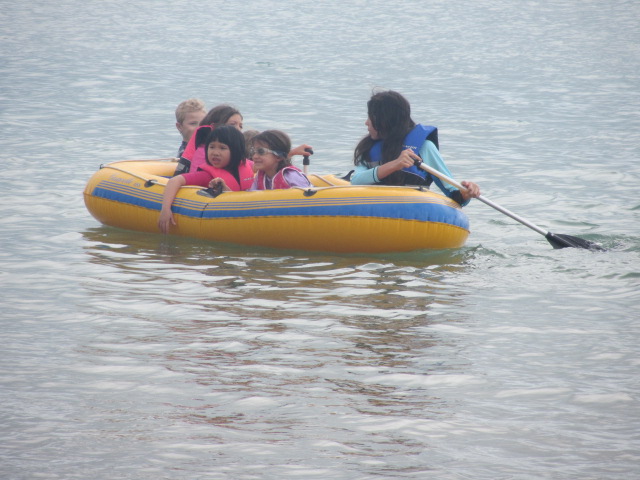 They each had a life-jacket on. A picture of the kids in Paul’s dinghy in Hervey Bay.

2 thoughts on “God save the whales: our trip to Hervey Bay, Queensland.”