When I first moved into the area at the beginning of 2010, my mother, in one of our bi-monthly telephone marathons, asked me to tell her about it. I suppose she wanted to know ahead of time whether it’d be the kind of place she’d subject herself to an eight-hour plane ride to come and visit. In my characteristically nonchalant manner, I told her about the hippies and Goths, being sure to eludicate their many charms. I told her too about the yuppies in their brand-spanking new triple-story houses up on the hill, and ordinary folk like His Royal Highness, Amanda and myself, who live among them.

Once over-run with downtrodden druggy-types, West End in Brisbane is now this place where the trendy aim to call home. Alongside mum and pop run coffee shops, we have a wide variety of ethnic eateries, a sprinkling of second-hand shops and yoga palaces, and just enough speciality health-food stores to exude that cool urban-village vibe.

Being only a couple of blocks to Brisbane’s Cultural Precinct, West End also features a thriving arts community. In fact, since I started having coffee with some of the other mothers from school, I discovered that almost every other person is engaged in some artistic pursuit or other. Amanda’s best friend’s mother, Melissa, for instance, quilts. She maintains a blog about the joy creating quilts brings her. Understandably, when Campbell Newman, Queensland’s recently elected Premier, axed the Queensland’s Premier’s Literary Awards, a hue and cry went out among us West Enders, over the scant support we receive as contributors to our state’s arts scene. 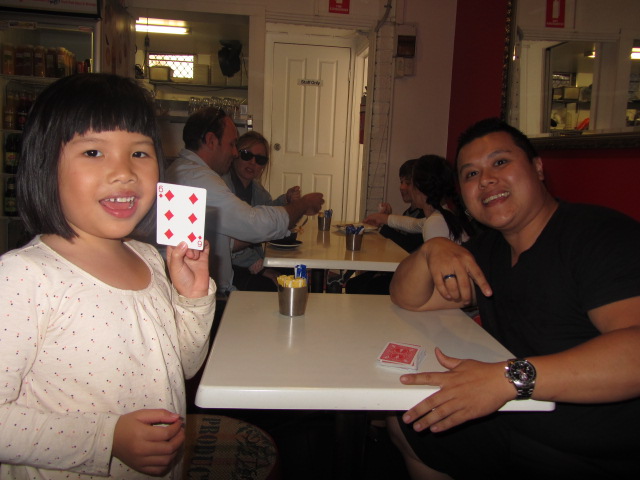 Magic in the suburbs as another customer shows Amanda his card tricks.