By our eighth day in New Zealand, the three of us had done everything we’d set out to do on our family holiday: we’d gone skiing, sat in a hot-tub out in the cold, seen a glacier and sort of celebrated my birthday. There was only one item left on our list and that was to see Christchurch, if possible, since we had left straight for Queenstown without exploring, the morning after we arrived.

We drove off from Mt Cook after our two-hour-long trek to Kea Point and back, eating Salada crackers we had in the car and whatever fruit we had left from our grocery shop at the beginning of the trip. I wanted a nice hot meal, perhaps bangers and mash or some such homely offering to fill my rumbling tummy with, but we were short on time, as well as cash, so the edible bits and bobs would just have to do.

The scenery was, as it had been throughout our trip, magnificent. I was happily clicking away when my camera battery died. Since I didn’t have a spare to swap, we just had to record whatever we saw with our eyes. Here’s what I took with the battery-light blinking crazily at me. 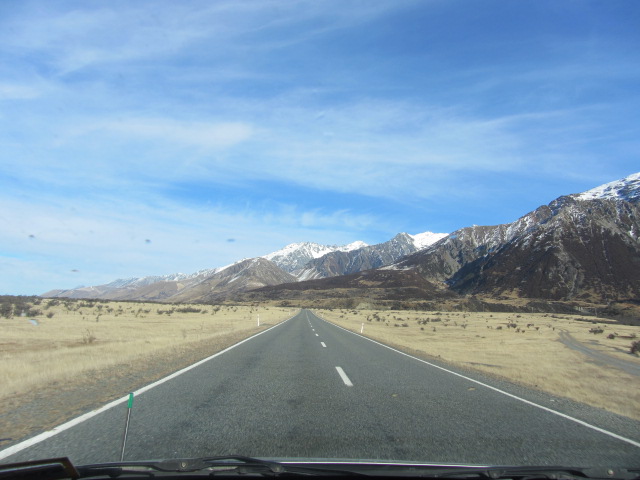 Christchurch bound. A picture of the road coming down from Mt Cook in New Zealand. 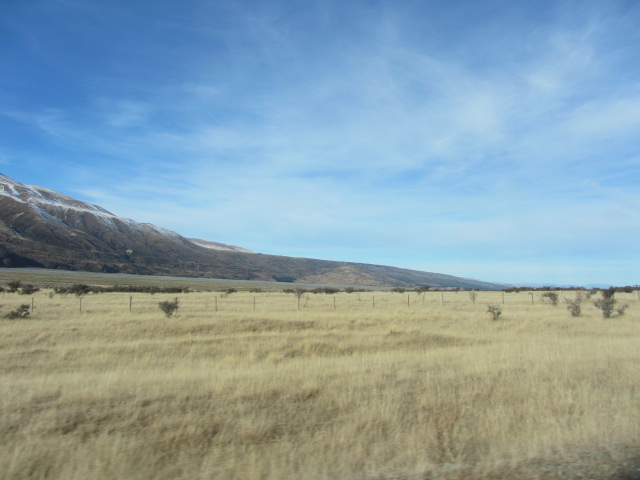 I see this and I think of LASSIE, the dog, and “Home on the Range.” 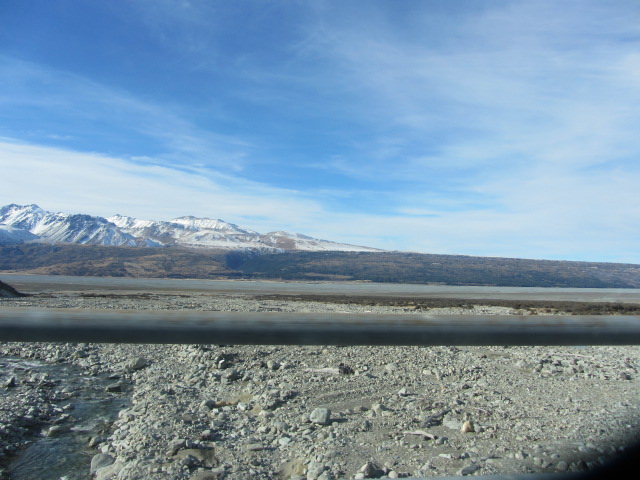 I just can’t get over how beautiful the New Zealand countryside is. Every stone, every rock, every blade of grass, seems to have been put there on purpose by someone. 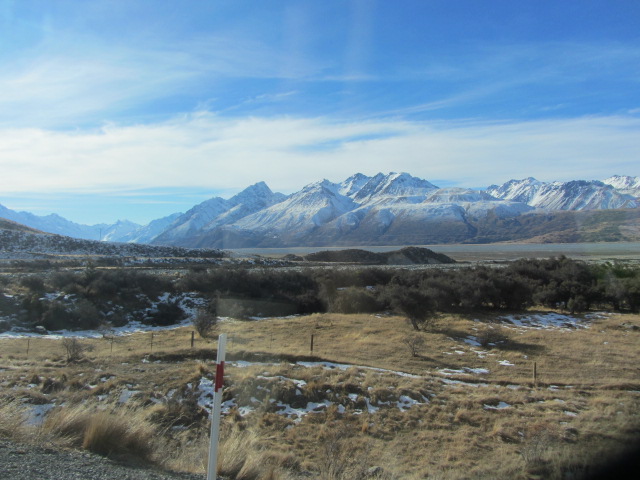 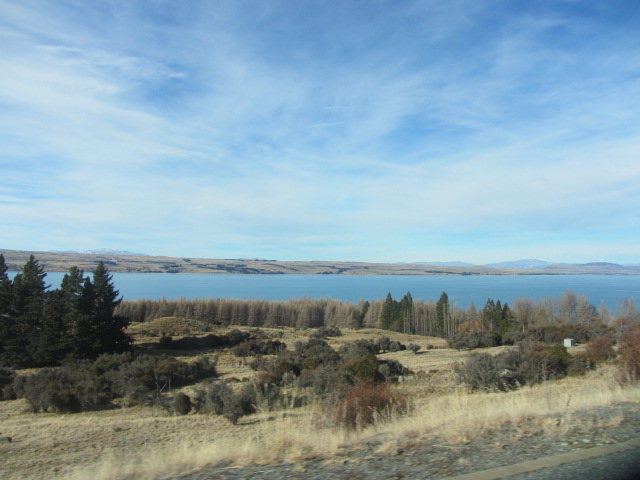 The last shot I took before my camera’s battery gave up the ghost.

Some 2 hours later, we stopped at Lake Tekapo for lunch. It was past 3 in the afternoon but most of the restaurants were still open. However, at NZD6 a serve of white rice, we decided to have yet another white-man’s meal of soup, burger and chips rather than the  Chinese food we were so badly craving.

With lunch over, we took to the road once more and after by-passing a host of small towns along route 1, reached Christchurch in darkness. There wasn’t much to see at that hour except for pedestrians crawling the streets in Riccarton, a suburb close to town with many Asian eateries.

In locating our accommodation, we rounded Christchurch town centre a coupe of times as the roads were mostly one-way and we were aided by a map the size of an Australian twenty-cent coin. In other words, we didn’t know where we were, or where we were going and there was nothing to refer to for directions. We used the hospital as a landmark and miraculously found ourselves in front of the YMCA or Y as people affectionately call it.

I told His Royal Highness that there was no need to book anywhere too expensive as with a 6.45am flight, we wouldn’t even have time for a good night’s sleep. All I was concerned about was having somewhere clean and safe to spend the night – the Y seemed to fit the bill, until we pulled up in front of it. After taking the trouble to ascertain the areas hit by last year’s devastating earthquakes, I was astounded to find we were not only near Christchurch’s red zone, but living across from it. The surly demeanour of the short-haired counter lady only made me dislike staying there even more, as I felt as welcome as a person crashing on a stranger’s lumpy sofa.

Notwithstanding the permeating blackness, His Royal Highness, Amanda and I piled in our car and fumbled our way to Riccarton for dinner. After that, we went to pump petrol in readiness of handing our car back to the rental company, before rounding Christchurch city, to see whatever we could.

The middle of Christchurch was cordoned off with metal fencing, the whole area resembling a war zone. Bealey Street reminded me of North Adelaide, in  a melancholic, cold, sort of way. We spotted a couple of motels along Bealey Street, but they didn’t give you the impression of being overly full. Having seen less than we’d have liked to, we headed back to the Y.

We set our alarms for 4am the next morning, then climbed into bed. I was half-way back to my Brazilian boyfriend in Batam when His Royal Highness called out to me, “Do you feel that?”

I opened one eye and then the other. I saw the bed move, then the whole bloody room shake more furiously than that South American dancer with the over-sized bum.

“Shall we get out?” His Royal Highness asked.

“And go where?” I was so freaking tired and an earthquake had to happen. Why, God, why? I fell back asleep without hearing His Royal Highness’ answer.

At the ungodly hour of 4am, I sprung out of bed like one of those Chinese zombies of old and stuffed everything into our suitcase. I roused His Royal Highness, followed by Amanda, then the three of us skedaddled out of there as though a bomb was set to go off. 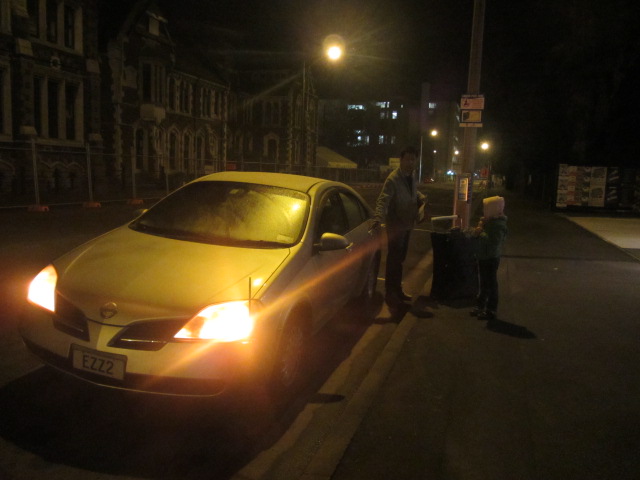 Working by street light. A picture of us loading up the boot in front of the YMCA in Christchurch.

One thought on “My New Zealand Family Holiday: Day 8 CHRISTCHURCH”