I’ve a little confession to make: I was in Sydney over the weekend and due to the sheer brevity of my visit (1 day) saw no one (I’ve got quite a few friends and family there), apart from one former classmate, Yuens. Beside the fact that she and her partner, Kit, run this awesome, fabulous, superlatives-can’t possibly do justice cafe called Not Just Coffee at the rear of 264 Oxford St in Paddington, it was high time we met up since we hadn’t seen each other in all of 17 years!!! Hence the exception to my sightseeing schedule.

Plus, some three to four odd years ago, Yuens wrote to me, asking me about Australia. At the time she was living in the US of A, working as a professional.

“The people are nice, the weather is good and the animals are delicious.” I was joking about the last. Anyone who’s ever had Kangaroo, will know how gamey it can taste.

Soon, she confided that she was looking to relocate here. At the time, she probably had no idea how expansive a continent Australia is. I was in Townsville, about to move to Brisbane, where I have been for the past three years. My idea of Australia was based on that and the other places I’ve lived in or visited. It goes without saying that living in Australia’s biggest city, Sydney, is vastly different to living in the country.

Then, just over a year ago, Yuens wrote to ask me for some help with the menu to a cafe she was about to open. She wanted me to jazz up the description of items. Since I have patronised more than my fair share of cafes and have an affinity for the written word, I was happy to do this for an old friend.

Anyhow, after sleeping in like a pig, since I was officially on holiday, Amanda and I made it to Not Just Coffee in Paddington just as Yuens and Kit were welcoming the lunch crowd. I immediately fell in love with the vibe there; tucked at the rear of 264 Oxford Street, accessible through a small lane, the place has this laid-back, secret hide-away in the city atmosphere about it. It’s the sort of joint you might rendezvous at with girlfriends to catch-up on gossip or exchange notes from the week, while enjoying a cuppa and a bite. 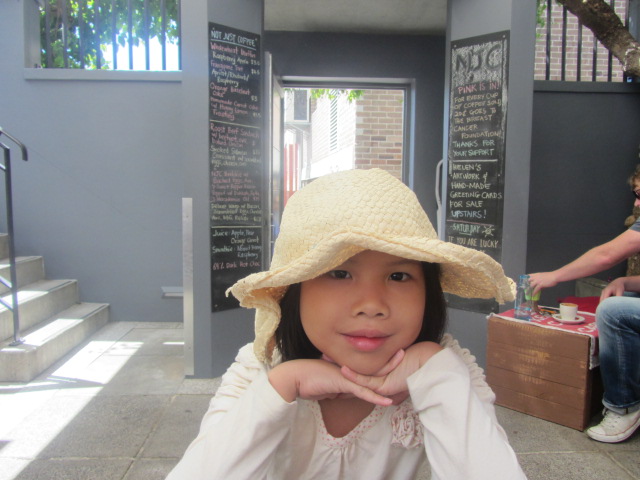 The black boards by the door list the day’s specials. A picture of Amanda inside Not Just Coffee in Sydney. 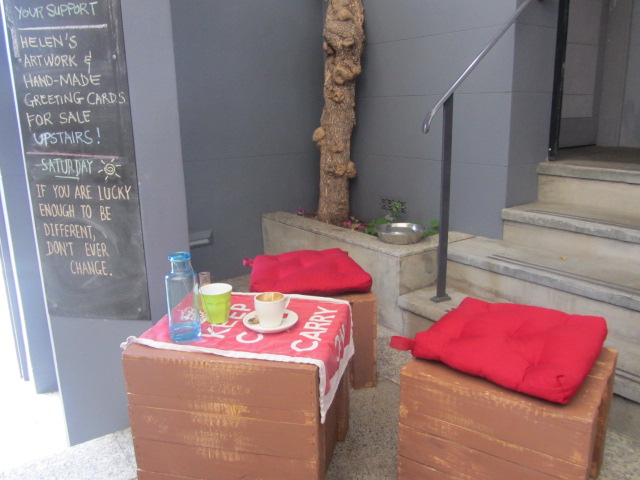 A picture of some of the seating at Not Just Coffee in Paddington, Sydney. 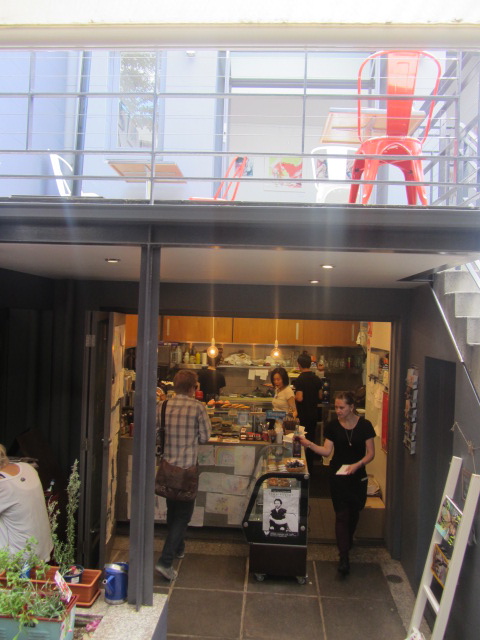 A picture of the kitchen at Not Just Coffee. Seating is spread across 3 levels with the upstairs balcony offering sun, the lower levels offering shade and privacy.

Which is just what Yuens and I did, between her tending to customers, after she brought me and Amanda our sandwiches. At Yuens recommendation, I had the weekend special of poached eggs laced with Dukkah, served on a bed of toasted sourdough topped with fresh tomato salsa and avocado. The eggs were still runny in the middle when I cut into them with my fork, the toasted sourdough oven-fresh and crunchy on the outside but still slightly soft in the middle, the salsa an unparalleled symphony of sun-ripened tomatoes and capsicum. An avocado fiend, I was rapt to find a whole Avo, instead of half. 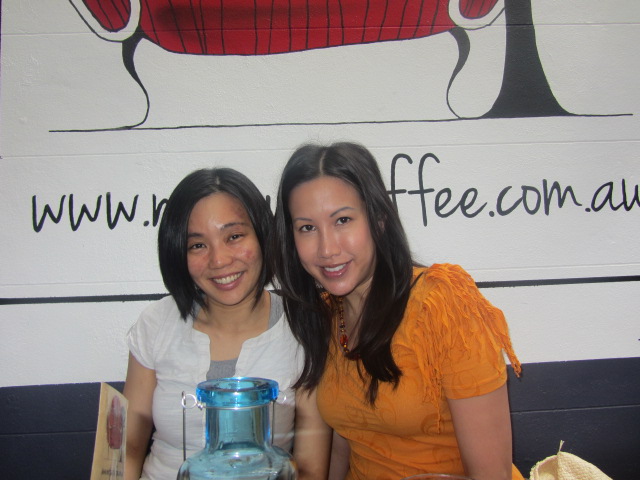 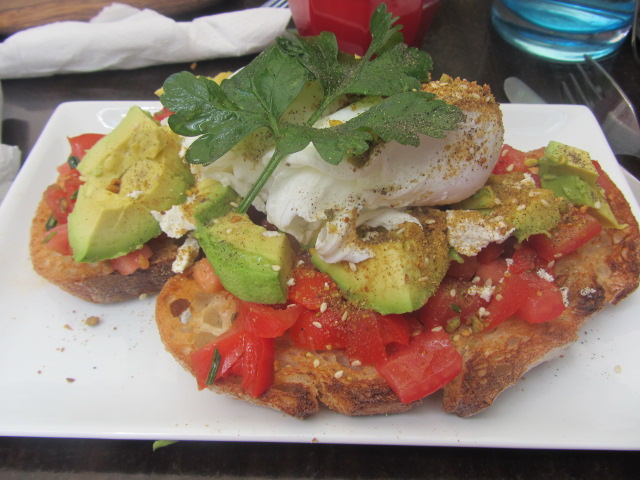 A picture of my weekend-special open sandwich at Not Just Coffee in Paddington, Sydney. 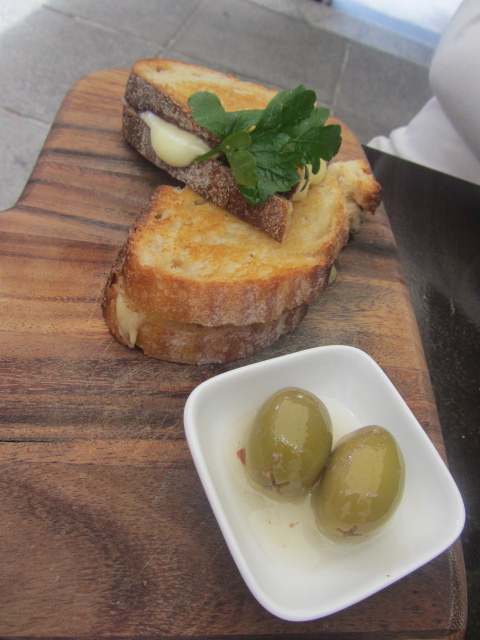 A picture of Amanda’s toasted cheese sandwich at Not Just Coffee in Paddington, Sydney.

Amanda had a toasted cheese sandwich, which she suggested, none too subtly, I make for her to take to school! She even offered me up a bite, so that I’d improve on my current, slightly stale, fridge-dehydrated offering.

“We’ve got to come back for another sandwich,” I told her. 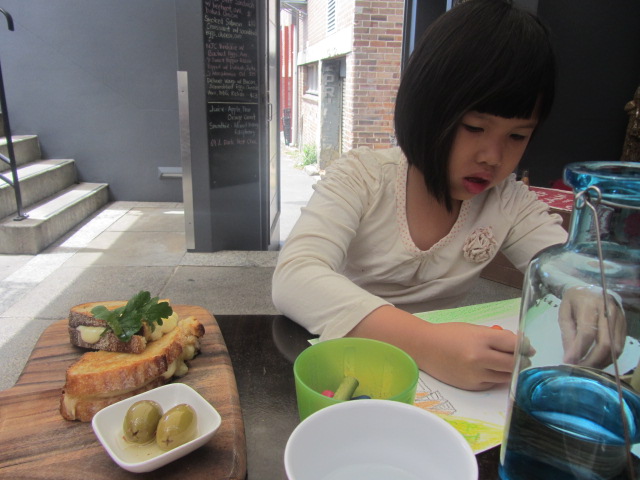 A picture of Amanda colouring at Not Just Coffee in Paddington, Sydney.

Having a great time at Not Just Coffee in Paddington, Sydney.

Yuens brought Amanda one of Kit’s cupcakes with pink frosting and a sprinkle of M & Ms on top. Watching her tuck in, I was slightly envious and in need of a little after-meal treat myself, so I ordered Not Just Coffee’s signature 69% Dark Chocolate drink. It was simply divine. Much better than similar offerings from some of the renown chocolatiers out there. 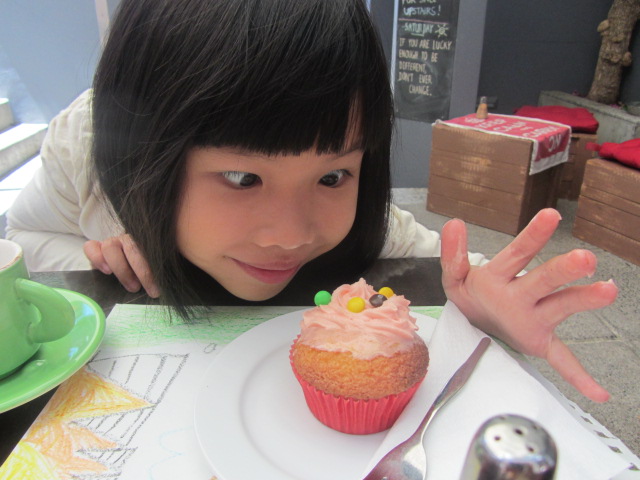 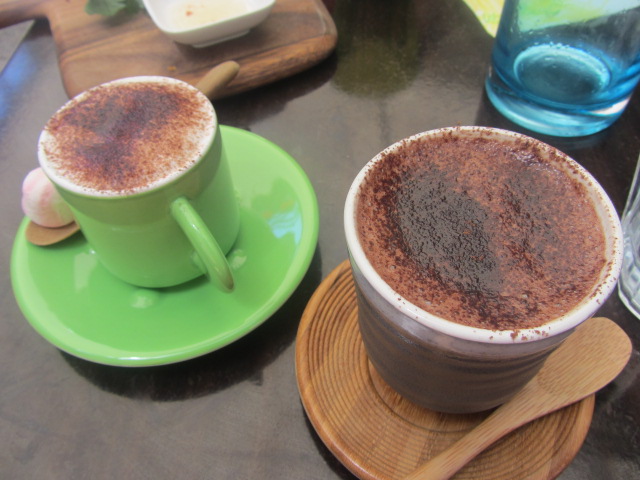 A picture of my 69% dark chocolate and Amanda’s babycino at Not Just Coffee, Sydney.

I rounded off my visit to Not Just Coffee with a survey of their cakes and tarts. As you can see from the pic, I was highly temped to indulge further. Damn the diet.

“You’ll see me again when my husband starts printing money,” I promised the baked goods. 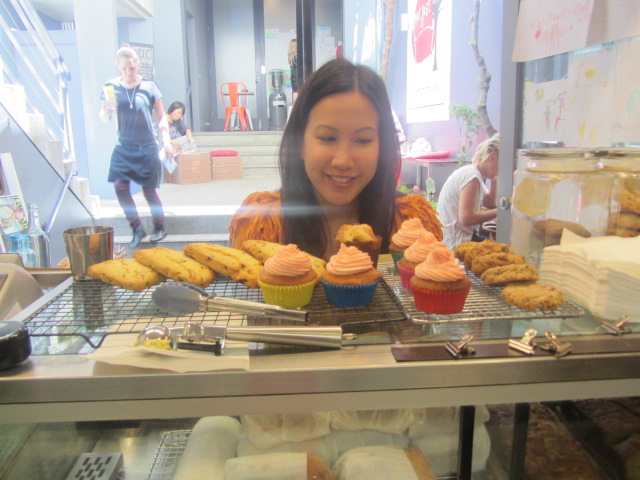 A picture of me salivating over Kit’s baked goods at Not Just Coffee, Sydney. 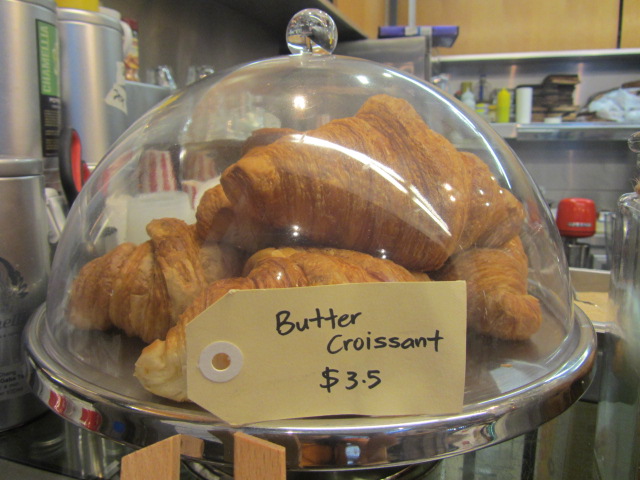 A picture of butter croissants at Not Just Coffee, Sydney. 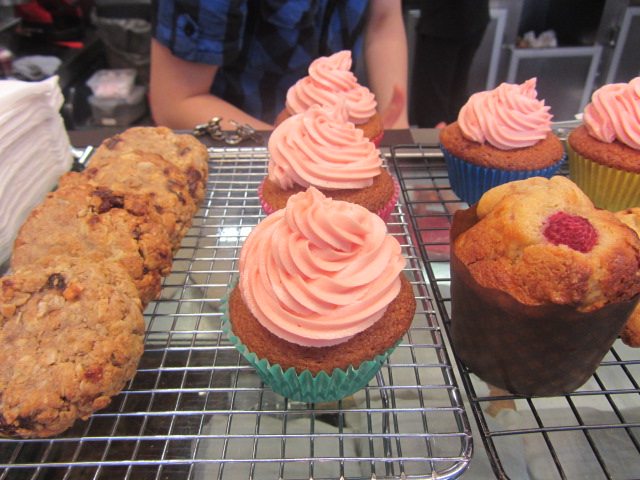 A selection of Kit’s baked goods at Not Just Coffee in Sydney. 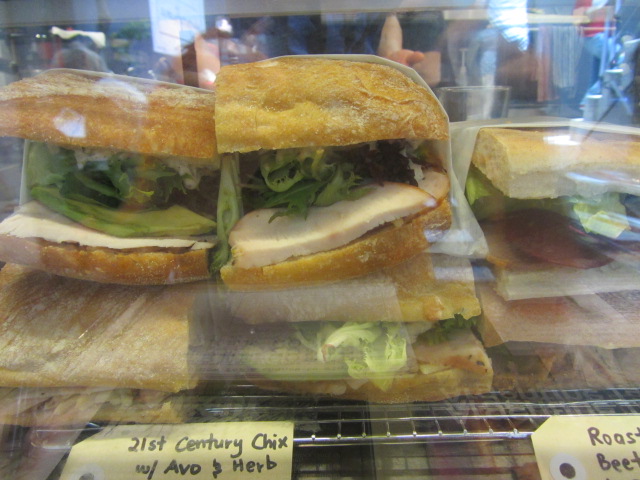 A selection of ready-made sandwiches at Not Just Coffee in Sydney.

Great food aside, I was thrilled to see Yuens and Kit living their dream of running a cafe. Many professionals fantasise about ditching their day job for something different, but these two have actually taken the plunge. It is with this last thought, that I bade farewell to the duo. Until my next visit to Sydney that is … 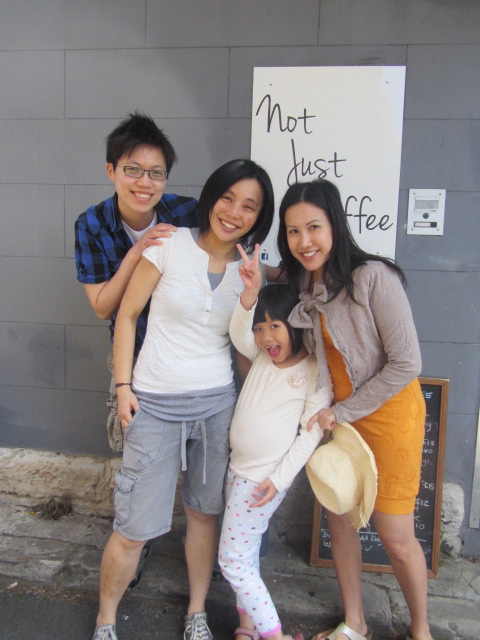 One for the road! A picture of Kit, Yuens, Amanda and I outside Not Just Coffee in Paddington, Sydney.

5 thoughts on “Not Just Coffee: a place for good friends and great food.”