Two days ago, after ten and a half years of belly-crawling uphill, His Royal Highness and I arrived at what is the apex of his surgical career: his passing the notoriously tough exams for Fellowship to the Royal Australasian College of Surgeons, recognition by his peers that he is up to the job of performing surgery. To appreciate the magnitude of the event for us personally, here is a couple of paragraphs I shared with friends on facebook, thanking them for their congratulations and best wishes.

For those of you who know us well, or HRH from back when he was just a boy, this has been a very long and winding, not to mention difficult road. I don’t think he’d be pleased with me talking so publicly about his struggles, but I feel I must since this is the story of our lives together.

HRH did his 6th year medical exam twice, when almost everyone did it once, because his mother died while he was doing it the first time. Then after passing and moving to ADL, the local emergency director tried to stop him from getting into training. He moved to Victoria where he got into training and after a year, was told he needed to be a citizen or PR in order to proceed. He was neither, so we moved to NZ and back. In the meantime, he passed his first part but was threatened with expulsion if he should fail to get into advance training.

By some miracle, the law changed and we were granted PR. HRH applied to advanced training and just as he was about to resign himself to waiting another year AND being the longest serving resident ever, he was posted to Darwin and from there Cairns, then Townsville and finally Brisbane. Along the way, he had every brick and bat thrown at him from people who mistake his gentle, quiet demeanour, borne of a traditional Chinese education, as being unconfident and incompetent. Here, the talk is half the show and if you can’t talk, then everyone is going to overlook you in favour of someone who can.

This was HRH’s 4th attempt at the FRACS and everyone’s necks, including his bosses who supported his quest, were on the chopping block. I won’t pretend and say that I enjoyed spending the last 4 to 5 years ALONE but yesterday made it all worthwhile. 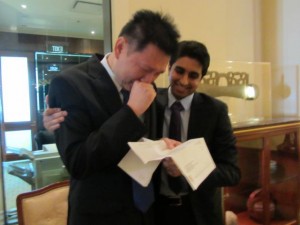 HRH choked with emotion at reading his FRACS exam results.

6 thoughts on “Pigs flew then they came to my party.”