When His Royal Highness suggested driving from Brisbane to Perth, I was filled with the kind of dread reserved for trips to the dentist. No, actually it was far worse as I do quite like seeing the dentist. I’d liken it to receiving a surprise visit from my father-in-law. If you’ve been following my blog thus far, you’ll know how I feel about HRH’s old man.

Sure, I live for road trips but one that stretches from one side of Australia to the other? You’ve got to be kidding me. This is a 46-hour undertaking we’re talking about; excluding the time we’ll need to rest and refuel – Australia being more than twice the size of Europe.

“But doesn’t this excite you?” asked His Royal Highness, all bright eyed at the prospect.

“Er. How many days do we have again?”

“Eight. But we can do the journey over 6 days.”

When we drove down from Townsville, I thought the journey would never end. That was only 16 hours, spread over 3 days; my bum had lost all sensation when we arrived. This is 46 hours spread over 6.

“Day one, we’ll stop in Dubbo,” His Royal Highness announced, with Amanda’s Ipad perched on his lap for reference.

I had a glance at the map. It seemed like an awfully long way to go until the next bed.

Confirming my suspicions, His Royal Highness said, “We’ll have to drive for more than 10 hours that day.”

Being the thoughtful person that I am, I’ve included a map of Australia so that you can trace the distance with your eyes. Basically, all you need to do is look at the second red line from the right, leading southwards, away from Brisbane. Sorry about the picture quality. That’s about all I could do given that most maps are protected by copyright laws. 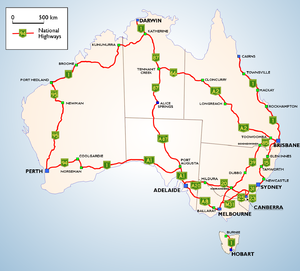 Note Perth on your left and Brisbane on your right. That’s a 46 hour journey going from A to B. A map of National Highways in Australia.

“We can either stop in Dubbo or in…” I didn’t quite catch the second name. It all sounded very far to me.

“As long as we have a clean bed to spend the night and a warm meal, I’ll be okay.”

“We can always pitch a tent out there.”

“Are you crazy? What about dingoes and mad men?”

I had visions of a dingo making off with Amanda like that poor baby Azaria.

“No, no, no camping for me. I want to sleep soundly through the night, thank you very much,” I said.

We’ve only ever tried camping once and it ended when I had to use the loo in the middle of the night. That was in New Zealand where there are no known predators of man.

Initially we were going to stop in Adelaide, but His Royal Highness decided that 6 to 7 hours was too short a drive. Perhaps, a shorter drive on one day means a much longer drive the next. I’ve agreed to take the wheel for two hours of every day.

“Day three we’ll stop either here or here,” he said, mouthing two strange names and pointing at the map. Both were somewhere along The Great Australian Bight. “There are only two resting houses along this stretch. From there, we have another 2000km to go.”

“We will need to carry a good spare tyre, water and petrol,” said I, regurgitating what I’d heard from Tania, who regularly makes road trips to visit her husband Paul, away again for work. We’ll be seeing Paul in Hervey Bay next weekend, where he’s currently locuming.

“No need petrol as we’ll be travelling along a major road.”

I hope he’s right about the petrol because it’ll be a bitch to push the car all the way to the nearest town.

“From there, it’s just another 2 days drive. How do you want to do it?”

“The fastest way possible.” I thought this an utterly modest request given the length of the journey. “After that, we’ll just check into a hotel and not move an inch until you have to start work.”

So if you don’t hear from me for six days to a week at the end of next January, you’ll know what I’m up to. Chances are, I’ll be massaging my comatose buttocks.