After launching yesterday’s post off into cyberspace, it occurred to me that I missed reporting the single most important event: we went to a shop in town to get fitted for skis. We had a 20% off coupon for gear but that couldn’t be used in conjunction with the lessons and ski passes we wanted to purchase. The knowledgeable-looking salesgirl assured us that the package we were getting from her, which included ski-pants, skis, lessons and passes was about the same as us only getting gear from her and lessons and passes next door. We didn’t need ski jackets as His Royal Highness had his from when he used to frequent the ski fields in Victoria and Amanda and I had borrowed ours from my good friend Tania.

I set the alarm for 7.30am and we left our hotel an hour upon rising, after I’d queried the front desk girl at the Copthorne on how to get to The Remarkables. His Royal Highness chose The Remarkables because kids have no entry fee. I chose nothing because I knew zilch about skiing. I was just hoping not to end up in Emergency with a broken something.

The reason I highlighted the front desk girl at the Copthorne will become apparent soon enough. Thanks to her, we went 1 hour out of town, in the wrong direction and thus wasted 2 hours backtracking to the right place. I remember asking her, since the map clearly said The Remarkables,  “Are you sure this is where we should be going?”

In response, she circled for me on the map our destination. I asked her again, “But are you sure? That says Cadrona over there.”

She said she was sure. I asked her a third time. “Is the Remarkables on your right or left then?” She reiterated her earlier instructions about following Frankton Road out of town, past the turn off to Albert Town, claiming that we’ll see the Remarkables on our left. She looked vaguely irritated while talking to me as though I were some imbecile for asking again. Lesson: stupid will sabotage you if you let them. Another lesson: if you go to the Copthorne Hotel in Queenstown, avoid asking the East Asian counter girl anything. I doubt she understands English.

Due to the bungle, Amanda missed the morning half of her “ski school.” We had to write NZD40 off as the Remarkables refused to refund us for the missed morning session and wouldn’t allow Amanda to join the lesson already in progress. His Royal Highness had to mind Amanda as I took off, as graceful as an elephant on steroids, with my clunky ski gear for my morning ski lesson. 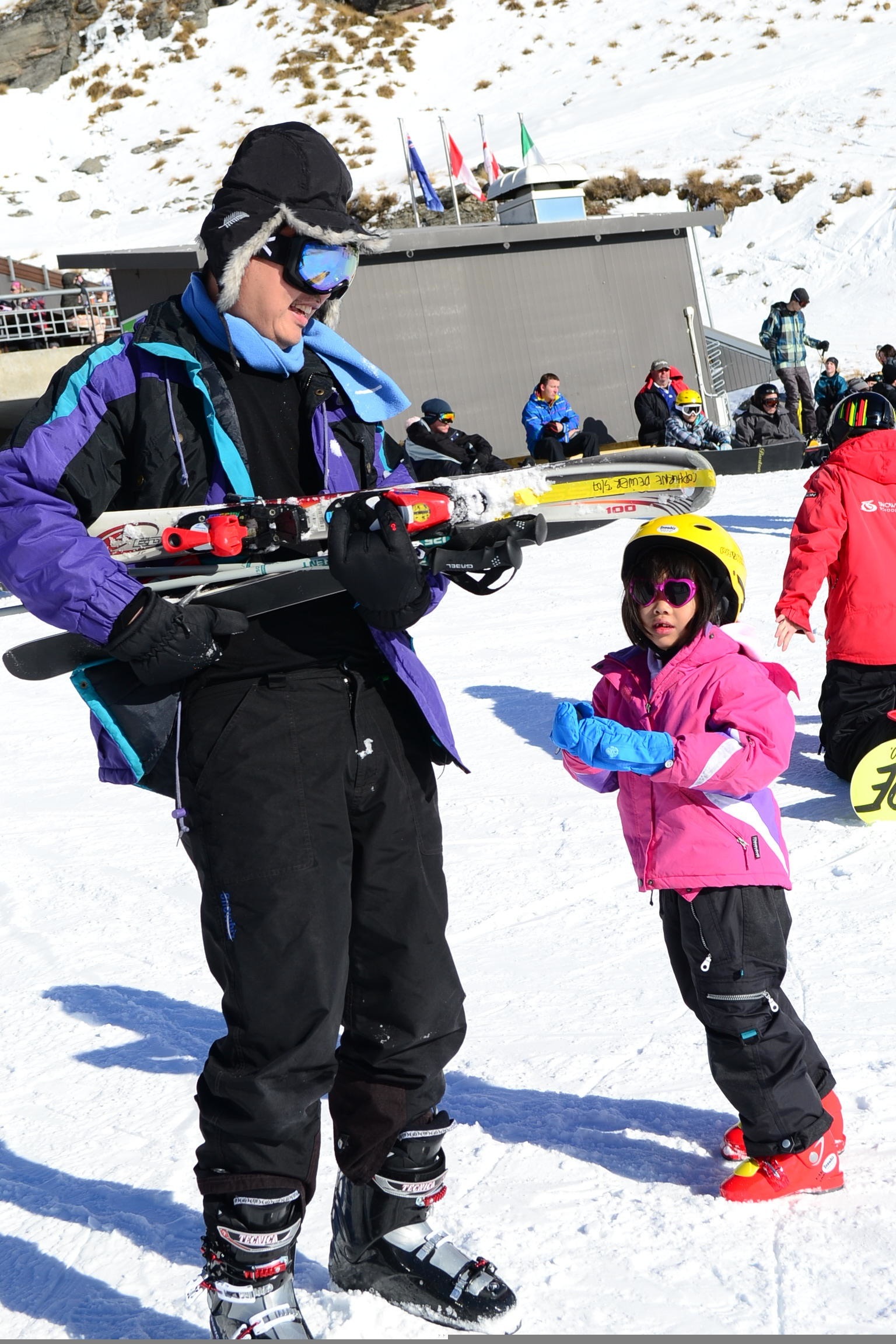 Horsing around on the slopes. A picture of HRH and Amanda at the Remarkables in Queenstown, New Zealand.

My instructor was a lovely Brit named Michelle, born with skis attached to her. She said, “I’ll see you at the bottom,” pointing to the lowest part of the beginner’s area and when she turned around, saw me sliding all the way down on my bum. Well, she only said to see me there, she didn’t specify how.

The other students had a chuckle watching me but I joked when I caught up with them that I was starting a new trend. By the time I reached my instructor, the others were already learning to put on their skis properly. We adjusted my socks and my boots, which still felt like having my feet encased in cement as the day wore on, before attaching it to one ski, trying to move in a circle, then attaching the other ski and doing the same thing.

Once we had mastered gliding down to a slightly lower part of the field, Michelle taught us to walk crab-like up to the magic carpet. It’s called the magic carpet because all you need to do is get on and stand still for it to take you to higher ground; as opposed to trying to scramble up the slope by yourself. I took so long dragging my feet sideways up to the magic carpet that Michelle told me I could take my skis off to walk there. Meanwhile my fellow students were happily skiing down the mini slope in the beginner’s area.

By the time I reached the magic carpet, I’d since fallen over a good 4 times, once without gloves, which I do not recommend. I’d taken them off because I was sweating so much my brain was beginning to think we were sunbathing in the tropics. Michelle suggested I take my jacket off instead of going gloveless as it was evident that I sustained a cold burn from ploughing hands first into the snow.

By lunchtime, I was glad to have any excuse to go home. Instead I met His Royal Highness who passed Amanda over to me to take to toilet before the start of her kiddy lesson. As part of her package, she already had lunch. His Royal Highness had eaten with her so he gave me money to grab a bite on my own up in the canteen. He said he’d join me after Amanda had gone off to class. “Oh, and by the way, you have another class at two,” said he.

Bloody hell. I went to customer reception to double check and sure enough, I had another two-hour lesson at two in the afternoon; that left me with less than an hour to plod upstairs in my boots and all, with the almighty fear of falling over and rearranging my face, to refuel for the next session. I swear to God, whoever designed ski boots must be into bondage and torture because they hurt like nobody’s business.

I bought myself a tall cup of soup and spilt half of it on my ski pants before I’d even reached the counter. If not for the boots, I would have turned around and bought myself an extra pie but even walking was a chore so I just paid up and went to sit by a bunch of girls. Soon after, His Royal Highness joined me, helping himself to my food.

“Why are you drinking coke?” he asked.

I only have a handful of those a year. I reserve them for extra stressful occasions such as these. “I hate skiing,” I said.

“Next time we’ll get you a hot ski instructor.”

“I’m not coming back. I hate skiing.”

“It’s always bad the first time but you’ll like it once you get used to it.”

“You still have a class at two. Pick Amanda up from her class when she finishes at four.” And with that he left me and my soup and coke alone.

The next time I saw my husband, I was back on the field, attempting to go down the slope without resorting to my bum. “Why did you bend down?” asked Michelle when she found me at the bottom of the hill.

“You have to teach my wife to ski,” pleaded His Royal Highness with Michelle as he was led away by his own instructor to the intermediate level.

“I’m not a doctor,” I blurted out. Hey, I could barely sort out my own feet! What could I do about Amanda’s feet? “Bring her over here,” I said.

I took Amanda off to the side where I undid her skis and boots and after making sure she felt better, handed her back to her instructor. Probably due to her fearlessness or His Royal Highness’ more athletic genes, she fared a lot better than I and was soon back on her feet, skiing the entire length of the beginner’s area as I dragged myself to the magic carpet  once again. 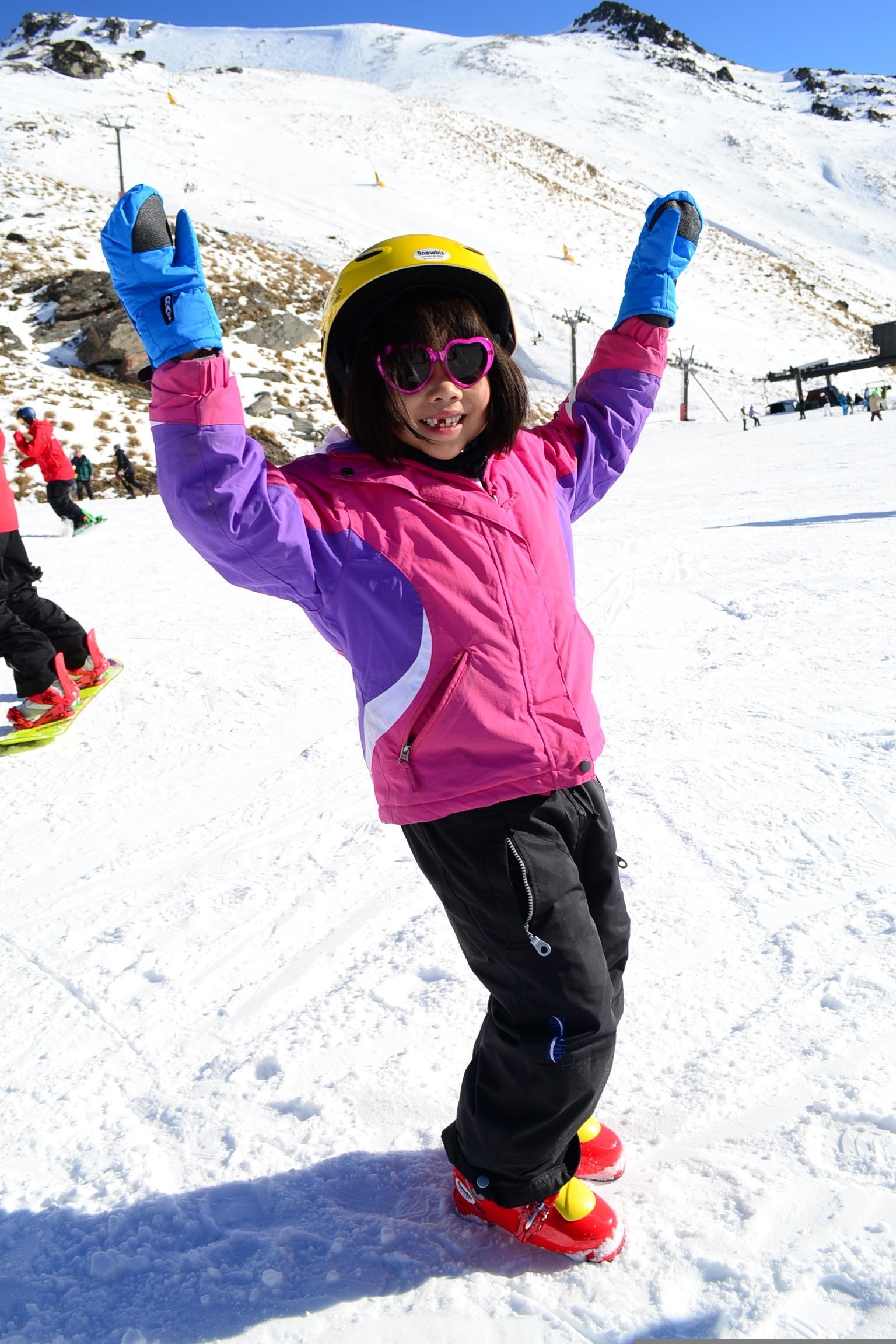 That’s my baby! A picture of Amanda at the Remarkables in Queenstown, New Zealand.

“I thought you’d gone off on another break,” said Michelle.

“No, no, I’m here,” I said. Mummy duty persists even when you are on holiday. Even when your feet are blue from being stuffed into unforgiving chunks of plastic disguised as shoes.

“Well see if you can take less than half an hour between each round.”

It’s a wonder I didn’t take more. “Next time I’ll aim for half ski, half bum.” My fellow students had progressed to another instructor but Michelle was still stuck with me because I had hardly mastered the basics after one whole day of falling over.

A few more rounds and whaddaya know? I came gliding down the hill swan-like. I was so ecstatic I was Leonardo Di Caprio in Titanic with my arms outstretched, shouting, “I’m the king of the world. I’m the king of the F*&&ing world. Woo hoo!”

From across the field, Michelle gave me a big thumbs up. Over the remainder of my lesson, she taught me to turn left and right. We worked on my braking. She offered to teach me one-on-one if I came back and asked for her by name, but even then, I knew it’d take more than a few smooth runs for me to want to do this again. I told His Royal Highness that next time he hits the snow, I’ll take a trip to a day spa instead.

A picture of HRH and me after a day at The Remarkables in New Zealand. 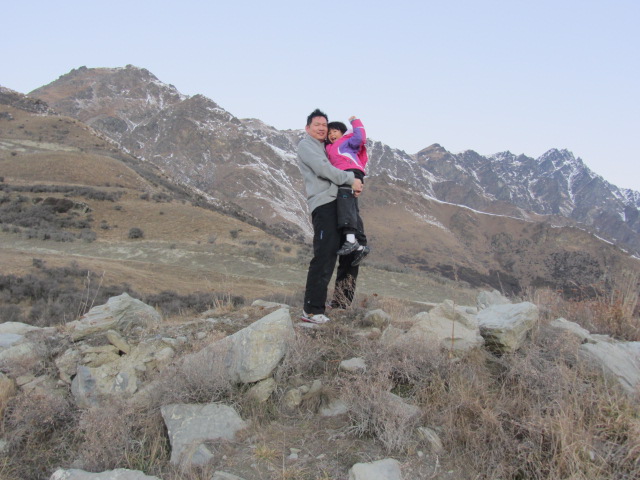 We conquered the mountain! A picture of HRH and Amanda after skiing at The Remarkables, Queenstown, New Zealand.