Where I come from, a “little guy” is – aside from being the owner of a diminutive physique – a person seriously short on moolah. What’s that? Cash. Money. Devil’s notes. Call it what you will but if you are putting up in a wooden shack with another 10 to 20 of your nearest and dearest, tapping electricity off lines that run the front of your charming “neighbourhood” and getting water out of a well or the nearest stream, then you are officially a “little guy.” The odd non-governmental-agency (NGO) might give you a hamper or a small hand out from time to time, but mostly you’re on your own in this big, bad, world. This my dear reader, is what poverty looks like up close. Stinking, limiting, potentially soul-destroying poverty. Such people are amply deserving of whatever help the taxpayer can and will give them. Where I come from, that amounts to almost nothing. 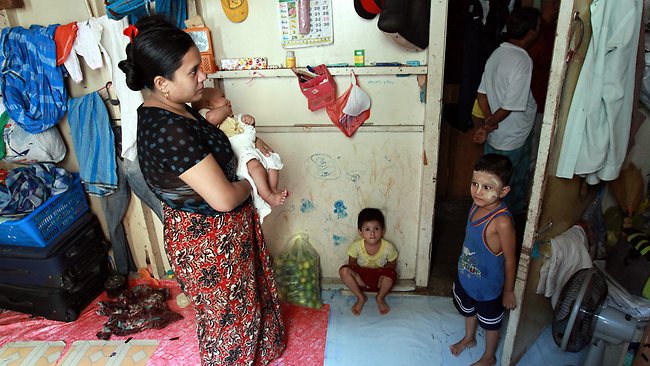 See what I mean? Where is the plasma TV or the Sony X Box? 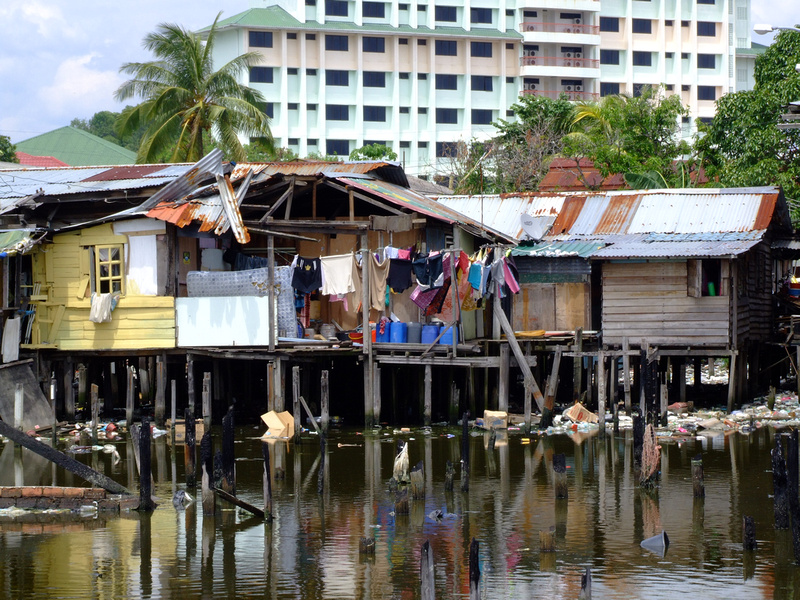 Can you imagine bathing in that water or washing clothes in it? Raw sewage goes from those shanty huts straight into the river.

So when a friend of mine argued, a day after the Aussie Federal Election 2013 that he, being a Labour supporter, was standing up for the “little guy”, I was totally mystified. After all, where in Australia do we have such infernal visions of materialistic deprivation? Do our supposed “little guys” live in slums or bathe in rivers strewn with faeces and garbage?

Let me make a few things clear: I’m NOT saying poverty doesn’t exist in Australia or that genuine poverty is not a cause for concern. It is. But is the “little guy” in Australia a REAL little guy or simply a guy who wants to eat off my table for FREE? In other words, a freeloader?

In response to the Coalition taking office, I told my friend, quite frankly, “I don’t get Family Tax Benefit (FTB) parts A and B, maternity payments or the school kids bonus. I plan to send both my children to private schools so GONSKI (the school reform proposed under Labour) holds no appeal either. So what difference does a change of government mean to me? Under Abbott, I will continue to get my Medibank rebate and HRH can get Fringe Benefits if he decides to buy a Lexus with his hard earned post 45% tax money.”

My friend said, “You’re right Estella. Screw the disadvantaged, screw the kids with poor parents and screw everyone who is poor because they choose to be poor so they can get $424.80 from centre-link every fortnight.”

Let’s examine that sentence, shall we? $424.80 a fortnight amounts to $11044.80 per annum. That’s just for FTB parts A and B. This excludes the yet un-axed school kids bonus or the rent assistance or the discounts on public transport, electricity and medicine that the   supposed-poor (I say supposed because I dispute that everyone is genuinely poor. More on that later).

I said, “Whatcha talking about? Have you forgotten that HRH and I are from regular, middle-income backgrounds? Tell me how many of the poor folks you know have moved as many times as we have or made half the sacrifices to improve their lot? We could have just sat back to suckle off the teats of society but we didn’t. Why punish people who want to get ahead by making them responsible for freeloaders who don’t?”

Yes, that’s right. HRH and I  are from very ordinary families. There’s nothing remotely special about us, except that our parents valued education and made the necessary sacrifices to put us through school. HRH’s father – who yes, is a gambler – sold off ALL his worldly possessions to fund HRH’s medical degree in Australia. How many of you who supposedly (there’s that word again) love your children, want to do that?

I added, “No one is “entitled” to welfare. Society needs to rid itself of that mentality if it is to survive the 21st century.”

Whether you accept it or not, this is a very competitive century. For Australia to thrive and prosper in an increasingly borderless world, the country has to have a more skilled, more driven, workforce. We can’t afford to drag along people who don’t want to pull their own weight.

My friend’s reply was, “I do my bit to contribute to those teats. No complaints but let me tell you this no one with their right mind chooses to be on welfare. The fact is those who are on welfare are society’s most disadvantaged and vulnerable. The word freeloader is right wing nonsense.”

No one chooses, eh? Let’s dissect that for a minute. While I wholly support the provision of welfare to the needy, the question I have is, who exactly are they? Society provides a safety net for single mothers. That is very good, but how long should this net extend for?

I’ve met this gay (I love gays by the way, so this has nothing to do with that) single mother (many of my friends are single mothers) who has an 8 going on 9 year old boy, who she refuses to vaccinate or send to school. Aside from being the recipient of welfare, she’s currently doing a tax-payer funded law degree, which she plans to complete when her boy turns 16, just so that she can spend more time with him. Okay, I’ll put it to you: wouldn’t you say this person has CHOSEN to be on welfare?

At this point, our mutual friend, on whose wall we were sparring, asked us to take our debate inside, as in to a private message.

My friend then said, “Well someone needs to stand up for the little guys.”

So back to the topic of “little guys.” Who exactly are they in Australia?

I said, “Little guys my ass la friend. So many who get FTB have their own homes, complete with plasma tvs and at least 1 car (this is called “middle class welfare” or the government trying to buy your votes). My car is 8 years old and only a regular Toyota. My kid wears hand me downs for the most part and the occasional new shirt. When she was a baby, all her toys were gifts. Is this how the rich really live? People sleep better when they believe Labour propaganda that the so-called rich are out to screw them.”

At this, my friend, who runs his own business, and whose household gets the maximum FTB, even though they all live in a brand-spanking new home, complete with plasma TV and new car, said, “Oh, all those messages were not from me. They were from my brother.”

Sure. So do you see what I’m talking about? Who exactly is a “little guy” when no one is living from hand to mouth in slum-like conditions?

For the purpose of this post, let me clarify a few more things: it doesn’t matter whether you are on welfare or not. My question is, WHEN do you want to get off it? Do you believe that you should be supported in perpetuity?

What appalled me were the names Labour supporters had for those who support the in-coming Coalition government. Among them: stupid, cunts, shit heads…the rest do not bear repeating. Where I come from, stupid is what a teacher calls a 6 year old who cannot read. It’s what you call your fellow citizen who expects you to haul his ass to wherever you’re going.

If one truly believes in this great good called democracy that the West is so intent on spreading to every corner of the world, then one should also believe that last Saturday’s federal election outcome is the voice of society, as a whole, fed-up with being legally robbed blind and vilified, being heard. Under Labour, you’d think that the enemy is someone born into wealth, who sits on his ass, who refuses to share the bounty of God’s great earth. Under the Coalition, you will see that the enemy is one who propagates these lies.

The beauty of living in Australia is that everyone who puts in the time and effort to improve themselves can get ahead. It’s all about the choices and sacrifices one is willing to make. To this end, I’ll tell you what I have to say to the left-wing statements I hear most often:

“But only the rich can afford to give their children a good education.”

Nonsense. A good education is available to all who send their children to school. Teachers can’t possibly teach your child if you don’t send him or her to school. If you think the rich have better public schools, move to their area. There’s nothing stopping you from doing that, except for an attachment to the 4 bedrooms, 2 bathrooms, rumpus and parent’s retreat you have going in the Nappy Valley.

“But it isn’t the same as a private education.”

Hey, I don’t expect a stretch limo to pick me up for bus fare so why do you expect something for nothing? If you want to give your child a private education, save for it.

So am I. Mine doesn’t cost current tax payers anything to keep.

You obviously haven’t read my posts carefully enough. I shop at Salvos and Lifeline stores. I frequent farmer’s markets. I don’t own X box or Playstation. I only recently bought a small TV, just so I could watch the outcome of the Australian Federal Election. It’s all about how you spend, not how much you earn.

I’ll leave you with one final thought: imagine for a moment that you are a farmer who puts in 80 or more hours a week doing back-breaking toil. With your proceeds, you decide to buy some land to raise cows and sheep. From that, you have money to install a grey water system to water your garden, a couple of tractors, hire a couple of farm hands to help you out around the farm, buy even more land to grow more crops. You prosper as a result of taking risk, foresight and hard work.  Do you think it is FAIR then if I just come over to your property weekly to help myself to your fruits or sheep or cows? Swap the word farmer with doctor, lawyer, engineer, accountant etc…Do you see the picture?