There is this list of top 10 most dangerous cities in the world making the rounds on the internet at the moment that has most Malaysians either nodding in agreement or spewing vehement denials. As a veteran fence-sitter, I am neither going to agree that our 6th place is deserved or question the method by which Malaysia was singled out for this dubious honour, but I am going to tell you what I tell ALL my Aussie mates who are keen to visit our wonderful shores. At the end of the day, we, expat Malaysians, or Malaysians living abroad, are our country’s most persuasive argument for visiting a country on such a list. We are friendly, law-abiding people in other people’s land, or are we not?

I always, always, stress this to all my Aussie mates: yes, Malaysia DOES have horrendous crime (more on that later) BUT by and large, the criminals leave tourists (especially white-skinned ones) alone. I cannot speak for Chinese tourists, reportedly asked to pay RM500 in bribes when failing to provide proof of identity, but I can say that most of the white Aussies visiting Malaysia have a lovely stay without incident.

It’s just like taking a trip to Springvale in Melbourne. Most Aussies fear being jumped on by Viet thugs while downing their pho, but I can tell you it is perfectly safe, even after having seen people pass suspicious packages to each other through wound down car windows. If you don’t mess with the gangsters, they certainly have no reason to mess with you.

Of course, this doesn’t apply to the local population in Malaysia. We are courteous only towards outsiders because tourism is a major industry and no one wants to upset the apple cart by scaring off the very people with money to spend.

“Basically, the more foreign you look, the safer you will be,” I assure my Aussie mates. “As for your kids, kidnappers and child smugglers don’t want them because they are hard to move around undetected. So you can have a very good, relatively safe, holiday in my country. You can live like a king – no cooking, no cleaning, no dirty laundry – for the entire duration of your stay.”

“Even if you were to holiday there on the cheap, there would still be no cooking, cleaning or laundry either. Our laundromats or dobi as we call them, have attendants, who will take away your soiled singlets and shorts and let you know when you can collect them, clean and pressed.”

If you are personal friends of mine, you’ve probably already heard of my parents being threatened at parang point (I’ve included a nice picture so you know what to look out for) whilst having fish and chips at a bistro in OUG, a suburb outside of the capital, Kuala Lumpur. Or perhaps even heard of my mother’s friend, an 83 year old lady being stabbed to death in her own home because she only had a miserable RM30 on her to give the intruders. Or maybe overheard me discussing the latest robbery where someone was “lucky” to have only been stabbed on the hand because they had RM700 on them. Yes, we have a peculiar definition of luck in Malaysia. To my knowledge, it means you’ve not been stabbed to death. 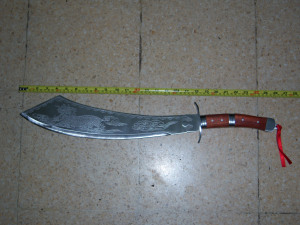 You have to have a sense of humour about this because every day, if you care to pick up the local papers, you will read about muggings, stabbings, slashings, rapes…If you turn on the TV, you will also see news of some on-going murder investigation or court case, unlike in Australia where the most exciting news for the day is which politician is wearing a blue tie and hence, secretly coveting the top job in the land. Now you understand why the bulk of us Malaysians are not into adrenalin-inducing sports like bungee-jumping, swimming with sharks or leaping from planes. Hell, if we want adrenalin, all we need is to step out our door, although, in many instances, adrenalin also comes to us, in the form of thugs breaking into our homes.

This probably also helps you understand why many of your leftist “feel-good” policies (rights of criminals to a fair trial, support of dole bludgers etc) hold next to no appeal to us. We’re just happy to have our quiet little lives, a small safe place to call home.

As for why you should visit Malaysia when you can obviously go to Singapore, in the same part of the world but one million times safer, I’ll say this: price point, mate. You can get two times the holiday for half the price. I could go on and on about our mouth-watering soups and sambals and kuehs and all manner of cooked delicacies, but if you have typical white taste-buds, you’re not going to be able to distinguish the good from the bad. Moi, for instance, will never order something called “Singapore Noodles”, not because I dislike Singapore – on the contrary, I like Singapore very much – but because no one in Singapore has ever heard of Singapore Noodles. It’s what Butter Chicken is to Indians; it doesn’t exist in India.

The souvenirs are also better in Malaysia; there’s Petaling Street where you can get LVs and Rolexs for the whole family. Although I should warn you against attempting to buy a parang; Malaysian law prohibits the unlicensed owning of weapons and a big, long, sharp knife, is considered one. Better to get a Chinese meat cleaver instead, which is used for chopping BBQ pork, which, in a pinch, might also double up as a weapon. I’m only joking. Just stick to the batiks, which you can procure for a decent price with much haggling at places like Pasar Seni. While you are there, you can also get your fortune told and your portrait painted for a couple of hundred RM.

If shopping is not your thing, take a sojourn to one of our highlands – even the Singaporeans dig this. They are especially enamoured by our Genting (pronounced ghen-ting, not, jen -ting, like the Singaporeans do). Or if stories of gamblers taking their lives by jumping from the hotel bother you, there are always national parks and quaint seaside towns to explore. Just be sure to observe at least the same safety precautions you would at home.