If you are unconvinced of the value of celebrity, consider the following: I spent close to $80 for Amanda and myself to see Tutankhamun in Melbourne and only $32 for us to view Nefer-something or other in Brisbane. For those short on Egyptology, one was a famed boy-king, while the other, one of very many priests in ancient Egypt.

No doubt both played a particular role in ancient Egyptian life, but only one’s remains and relics command top dollar. In death, as in life, it would seem that reputation precedes a person.

The difference in price probably also reflects the size and scale of the Tutankhamun exhibition at the Melbourne Museum versus the relatively modest number of exhibits on priestly life, on loan by the British Museum, at the Brisbane Museum. The former covered 10 halls – I remember because I was out of saliva from reading and explaining exhibits to Amanda by the end of it – while the Mummy exhibition at the Brisbane Museum only spanned 3 halls.

At the Melbourne Museum, I saw Tutankhamun’s entire extended family modelled in various materials, salivated over the delicate craftsmanship of furniture and various day-to-day bric-a-brac and paused in awe at his gilded Sarcophagus. At the Brisbane Museum Mummy exhibition, I saw Egyptian priests in various forms – bronze statuettes,  stone statues and mummified bodies – and learnt all about their daily lives.

For instance, I read that Egyptian priests worked on rotation and for defined periods of time, that roles were passed down from father to son, and while serving, had to adhere to a strict cleansing and dressing code. They also had to abstain from sex. By the end of the exhibition, Amanda could even pick out who were the priest on the Stela – pictorial stone carvings – based on which character had a bald head. 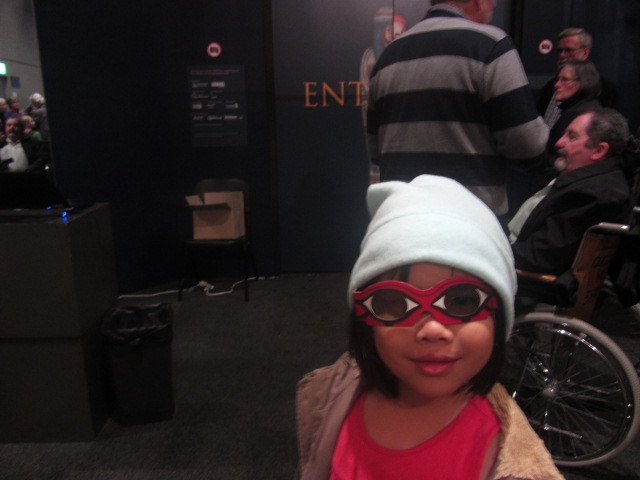 Amanda, waiting for the doors to the 3D movie at Brisbane Museum’s Mummy Exhibition to open.