Most people assume that just because I’m Chinese I’d want a son. Sure, this is true for the majority of Chinese, especially those from my parents generation, for whom boys are a particular treasure, but as far as I’m concerned, gender is irrelevant so long as a child is wanted. If a child is unwanted, no amount of desirable physical attributes will change that.

Don’t misunderstand me. I have no beef with boys or people who want boys. I’m just not the type to glorify a particular gender. Like other facets of my personality, this probably has something to do with the way I was brought up.

As most of you know, I have three other siblings: two older sisters and a younger brother. My sisters live on the other side of the world so I haven’t seen them in close to 13 years, but we do talk once in a way via Skype. My brother I see whenever I go down to Melbourne, at least twice if not thrice a year. We are close, although I’d be the first to admit that for much of our childhood, I resented him. I tried balding him when we were kids.

Why? For a start, he had a few inches more where it really mattered, in the nether region. He was the son my mother’s first husband had wanted, the son my own father had wanted. Heck, if my mother were honest, she’d tell you too that he was the son she wanted. She often said that she had us to please our fathers. If you left it to her, none of us would have been born. Yet the way she looked at my brother, told a different story.

When it came time for us to pursue tertiary study, she allowed him to do whatever he wanted, while I was threatened with discontinuation for a course she wanted me to do. Meanwhile, too many well-meaning relatives told my parents to spend more on my brother’s education than mine, citing his need to support a family in future.

As an adult, I heard from an uncle that all the women in my family favour sons because their mother had favoured their brothers. They begrudged their brothers the preferential treatment but grew into mothers who discriminated between their sons and daughters.  Chinese logic is that boys care for you in your old age, whereas girls get married off.

The age-old belief used to be that we girls were the property of our fathers when young, our husbands when married, our sons when old. No where is it said that girls care for their parents, except that in reality, many do, since after marriage, boys are more obedient to wives than they are to parents. The tyrannical Chinese mother-in-law of yore has since been replaced by the consultative mother-in-law of present, a smart woman who acknowledges the influence her daughter-in-law has over her beloved son and consequently, running around for the olds has now fallen to the shoulders of daughters.

This silent yet seismic shift in Chinese society is reflected in the price girls command over boys in today’s baby market. Due to the limited number of babies available for adoption and the Malaysian government’s disallowing of foreign adoptions, many childless  couples there are forced to pay parents, brokers and doctors good money to get a child. Twenty odd years ago, my father’s cousins – two brothers – bought a child each. I say bought because they paid for those children. One paid RM10k for a boy while another paid RM8k for a girl. Then, boys were still more valuable than girls.

Ten years ago, my mother’s friend bought a girl. Her husband was much younger and she’d left the baby-making business too late. She paid RM28k. If she’d wanted a boy, she’d only have to pay RM25k. The price discrepancy between the two isn’t much, but it is enough to show you a change in Chinese society’s perception on the value of women. With the number of boys outstripping girls, many Chinese men of my daughter’s generation will have to look beyond their own race for a spouse. Today, it’s a choice, in the future, a necessity. You can tell that I’m almost gleeful.

In connection with my stance on not having a son, I’ve been accused of being a feminist. If feminism means wanting respect and dignity for women, then I am unapologetically one. Why should I be considered a lesser person just because I am a woman? A mother who has a string of girls in the hope of having a boy says just that: girls are inferior. That’s not to say I’d abort a baby if it were male. I’d simply skip the song and dance about his spout.

“But doesn’t your husband want a son?” people ask.

My husband did not become a surgeon by being trapped mentally in the middle ages. He’d like one of each gender, since parenting boys is unlike parenting girls. But he’s happy with our daughter, in so far as he has no issue with her being unable to perpetuate his surname. According to wikipedia, his is the most common Chinese last name as of 2007, so one less person carrying it is not going to make hell of a difference.

To my mother’s credit, she’s amended her views in the last 10 years. You have to when your son can, in her words, “call everyone but you.” Her sisters have to make appointments to see their boys too. I guess life’s a bitch. Just nobody told any of them. 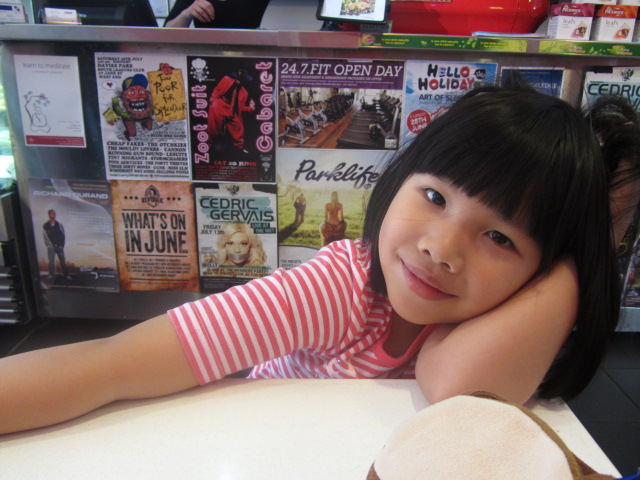 My Amanda. I wouldn’t trade her for a thousand boys.

One thought on “Why I don’t want a son.”