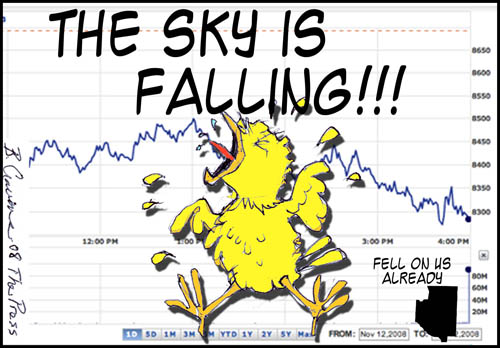 This might as well be a picture of me.

Chicken Little (aka Henny Penny, pictured above) and I are second cousins. Sometimes I suspect our kinship is a lot closer because like Chicken Little, I constantly picture the sky falling. And yes, there is that same compulsion to report on the falling sky to the King – in my case, the resident monarch, HRH.

Fortunately or unfortunately, he too shares my concern about the falling sky. Instead of laughing at me when I told him to follow our then-newborn Amanda from the delivery suite, to make sure she doesn’t get wrongly tagged as someone else’s baby or carted off by strangers visiting the ward or in a hospital that only delivers a handful of Asian babies, smuggled out and sold off to Asia for 10 large – I’m highly adept at analysing the variables, mind you – HRH dutifully stuck to her as she was taken away to be weighed and measured, then brought back to me. In the weeks after that, we took turns guarding her – me in the day, him at night while I caught up on my sleep – in case she’d choke on her own saliva or somehow stop breathing while asleep.

When HRH was no longer able to give me a couple of hours sleep before I came on for the night shift, I took to sleeping with her instead; she was always on my arm and since her birth, I have become an extremely light-sleeper, so there was never any danger of me rolling on to her. Till today, some 8.5 years later, Amanda still sleeps with us and HRH and I are both in agreement that the most comforting sound to our ears is that of her snoring.

You might consider it extreme for an 8.5 year old to be still sharing her parents’ bed, but let me tell you what a friend of mine told me. She doesn’t have 1 but 5 children sleeping with her and her husband in a house that has at least 2 other bedrooms. “If there is a fire, I know where my kids are. He can grab the smaller ones and I can grab one under each arm and run out.”

Since then, I have learnt (mainly from reading the news) of other reasons to always know where your kids are: runaway pythons, nitrous oxide from old decrepit heaters, Ted-Bundy wannabes who go breaking into sorority houses to name but 3.

“But I don’t want my kids to live in fear, Estella,” said my new friend Nancy, to me yesterday. “The world is a beautiful place and I want them to discover it.”

“The world is a beautiful place indeed…but there are many bad people in it,” I insisted.

I would have told her about the clown who murdered 33 teenage boys and young men, or the boy who raped, murdered and mutilated his childhood friend or perhaps the origins of my general distrust of everyone but she appeared to have her mind made up.

“Think about 10, maybe 15 years ago (when we were growing up). I want my kids to know what it is like to play in the streets, to go to the park with friends, to be independent,” she said.

Those all sounded like very nice things, but those are things I never experienced as a child because Malaysia was already not that safe even then. When I was born, my parents could get away without having grills on any of the windows or doors for 2 whole months. Now they would not dream of being indoors without the grills pad locked.

I would have told Nancy about the little boy from my childhood who got abducted and had his arms and legs cut off, smuggled out of the country to Thailand and made to beg on the streets there, but I knew she would hear none of it. I would have told her about Ong Tin Tin too, who was taken from a Malaysian school and never seen again or the eight year old who went missing and was later found dead, sodomised and stuffed in a gym bag, but Nancy had a determined look about her.

“We live in a civilised country,” she continued to say.

“Have you heard of Daniel Morcombe of Queensland? He went out to buy Christmas presents by himself and was never seen alive again. His twin brother still blames himself for not going with him.”

“Yes, but there are cases like that everywhere,” she said, dismissively.

“But what if this was your kid?”

“These things are fated, Estella.”

I believe in fate, but not when it comes to my kid. “Why expose yourself to such risks? Why endure such pain?”

I was living across from Monash University and often frequented the Australia Post there, when a student went on a rampage with a gun, killing 2 and injuring 5. What I’m trying to say, perhaps ineloquently, is that serious crime doesn’t just happen in America. It does and has happened in a country as safe as Australia too.

Another picture of Chicken Little holding an umbrella to protect from falling acorns.

Nancy allows her boys, the same age as my Amanda, to walk 3 blocks to the shops and back on their own. I won’t even allow Amanda, who can cross the road on her own, to walk or ride to school by herself, less than 50 paces away from our home, because in those 50 paces, she can meet anyone and anything can happen.

Except during school hours or on play dates at other people’s homes, which I thoroughly assess beforehand for sources of danger or dubious individuals, I have my eyes on Amanda at all times. At the very least, she is within earshot. In previous years, I volunteered for almost every school outing just to make sure Amanda was safe. Amanda even asked me, ahead of next year’s school camping trip, if I can volunteer for that too, so that she’ll be able to sleep at night.

“The problem with teaching children about stranger danger,” said my friend Lucy, “is that  children are only taught to beware of people they don’t know. In many cases of child rape and molestation, the crime is perpetrated by someone known to the victim.”

For this reason, I’ve already explained to Amanda why she can’t follow anyone home without my expressed permission or take food from them. “I don’t care how well you think you know them. You just can’t.”

Last year, before our move to Perth, Amanda’s bestie’s mum loaned me a book called “Everyone’s got a bottom.” It’s a tool for parents to broach with their kids the testy topic of “self protection.” The book is easy to read and can be shared with children as young as 3. Here’s a list of tips on how to keep your children safe from the Malaysian Edition of The Asian Parent. It touches on the abduction and death of 6 year old William Yau Zhen Zhong.

“But what about when Amanda goes to Uni?” asked Nancy.

“Oh, we’ve thought about that already,” I said smiling.

What I didn’t tell Nancy is that HRH and I plan to buy a house right in front of whichever University Amanda gets admitted into so that we can continue to keep two eyes on her. Either that or I will drive her to and from University, to and from all parties, to and from all shopping malls, or have her drive me everywhere, since she’ll be presumably driving by then.