Since I’m going back to Malaysia mid-December to see family and friends, I thought it wise to try to loose a couple of pounds as I’ll be presumably feasting for most of my stay there. Perhaps, if I return home looking like the overstuffed dumpling I do now, my mother, very much fat-phobic, will give me endless lectures on “the need to shake off some weight.”

Enter the Raw Food diet, a way of eating based on well, raw food. I intend to stick to this diet as long as possible, to shift 5kg of lard from my waist, hips and thighs. I’m a pear-shaped woman so these are my problem areas.

Before you send me care packages, rest assured that I am eating well, better than ever in fact. Last night for instance, with His Royal Highness on-call, hence not eating with Amanda and I, we had zucchini pasta with creamy Avocado sauce and a side salad of mix greens and truss tomatoes dressed in balsamic vinegar. This morning, I had a “garden vegetable soup” composed of the blended leftover zucchini pieces from last night’s pasta, 1 Avocado, 2  cloves of garlic, a tomato and a large handful of salad leaves. 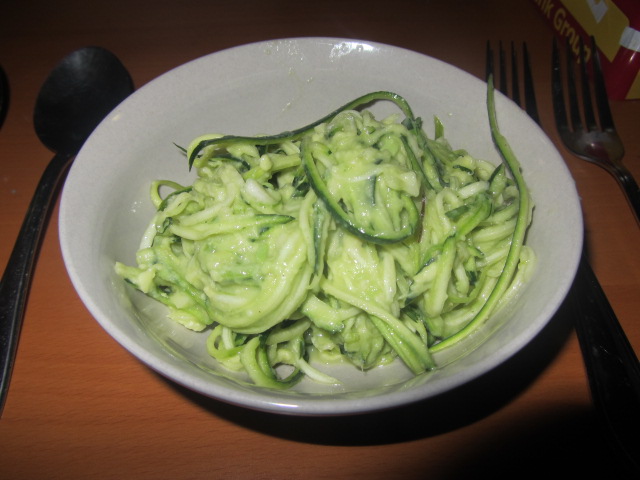 Surprisingly delicious. A picture of my raw zucchini pasta with Avocado sauce. 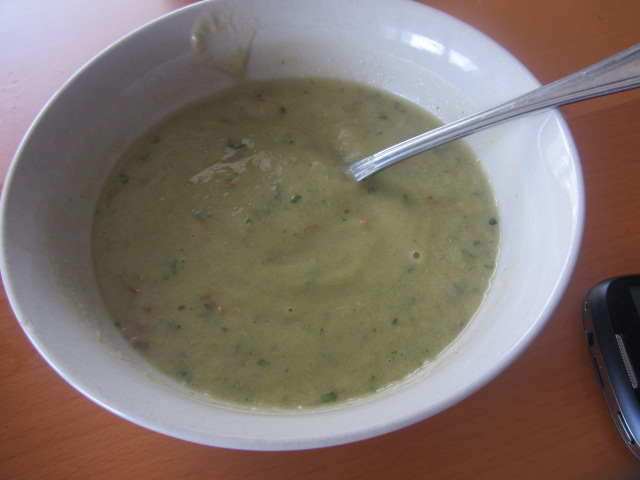 I got the ratio of green to red vegetables wrong, hence the unappetising colour. But it tasted good anyway. A picture of my garden vegetable soup which I could have had with flaxseed crackers.

So as to beef up my protein intake, in order to feel fuller for longer, I swung by my local health food store this morning after dropping Amanda off at school and bought Sun Warrior Raw Vegan Protein. It’s supposed to be a non-gritty powder, but obviously not as smooth as conventional Protein Powder made from soy or whey.

Weight loss aside, I’m motivated to give this diet a go as I’ve heard many good things about it; my mother, who once thumbed her nose at raw food, insisting that Chinese only eat cooked food, has recommended me many a juicing recipe after her half-brother, my half-uncle, recovered from pancreatic cancer.

A team of Japanese doctors had opened him up and discovered that the cancer had spread. Without doing anything, because nothing could be done for him, they sewed him back up and more or less told the family to be prepared for his demise. I told His Royal Highness about my half-uncle and he said, “He’s got at the most 6 months. Pancreatic Cancer is a very aggressive cancer.”

Touch wood, he’s still with us, years on, apparently in remission. According to the great family grapevine that is my mother, he was fed vegetable and fruit juices around the clock, apart from having chemo-therapy. Of note is soursop, a tropical fruit that has achieved cult status for purportedly being able to combat cancer. I hear he had plenty of that too.

If you’re interested in trying out raw food or just adding more vegetables to your diet, do check out Ani Phyo’s website or that of Jennifer Cornbleet. The former has come out with a raw food recipe book with Asian-inspired dishes, based on her trip to Thailand, that might appeal more to the Asian palate, while the later has many tasty recipes for soups, salads, main meals and desert. Because this is 2012, you can also find both on youtube.