Next to the French, Chinese are probably the most food-obsessed. We start out our days thinking about dinner, feasts to be had at the weekend and closest holiday, and in many cases, plan road trips and holidays entirely around the sampling of various foods. In fact, if you were to tell a Chinese there’s NO food at an event – like in Australia, where most event organisers only serve tea and coffee – it’s unlikely you’ll see him or her. Even when there is no food to be hand, our minds still conjure up images of juicy roasts, succulent braise meats and other delectable morsels a long history of hunger and deprivation has inspired.

Case in point: moi, strolling through Perth’s Zoo with the family, thinking of all the wonderful meals I could have from the various creatures on display. This constant thinking of food I assure you, has nothing to do with me being on a diet. It springs itself on me even when full, at the most inconvenient of times – this being one of them. 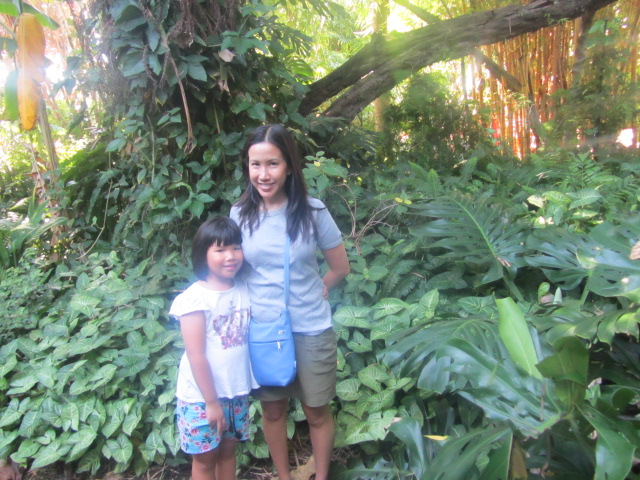 “Yes, most certainly. Especially covered in BBQ sauce,” I say. “Or pan-fried with a bit of salt and pepper.”

“Mama! How can you look at the birds and think of food? ” she says in mock disgust. 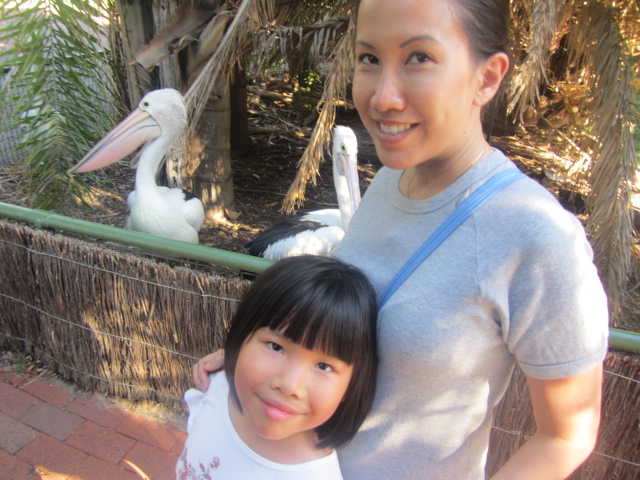 Us with dinner, maybe? A picture of Amanda and I with Ibises at the Perth Zoo.

How can I not? Aren’t the crispy pigeons served in Chinese restaurants birds too? Or have they morphed into plants since they no longer flap their wings? Amanda has never liked chicken or eggs so she can’t make the mental connection. She has the Aussie affliction of liking chicken breasts, the driest and most tasteless of meat. To get her to eat some meat (only monks, the poor and enlightened individuals are vegetarian), I’ve to resort to cooking chicken breast, and so, have to consume it myself. O’ the sacrifices of motherhood.

“How about that turtle?” says Amanda, pointing to a great big shelled thing. 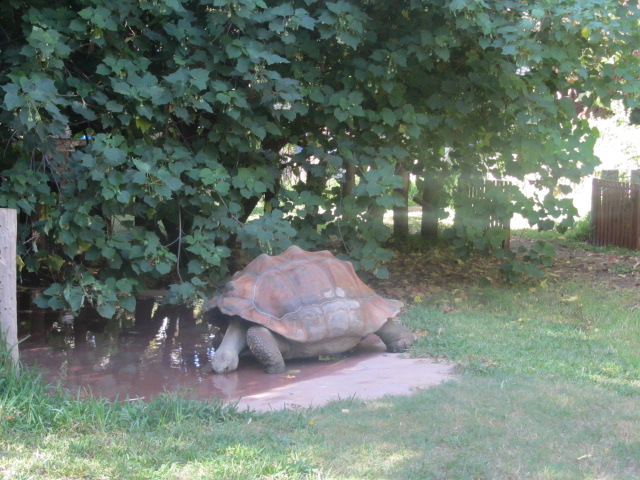 “Delicious too,” I say, ribbing her, although I can distinctly remember having turtle soup in childhood. It tastes much like beef, only stringy.

In Malaysia, there are forest shacks you visit to have your fill of game without any hunting. I’ve heard of someone dying after consuming deer cooked in herbs or some other wild animal. Some of those are spirits and NOT really animals, they say. Or the human victim must have offended one of the local deities guarding the forests. 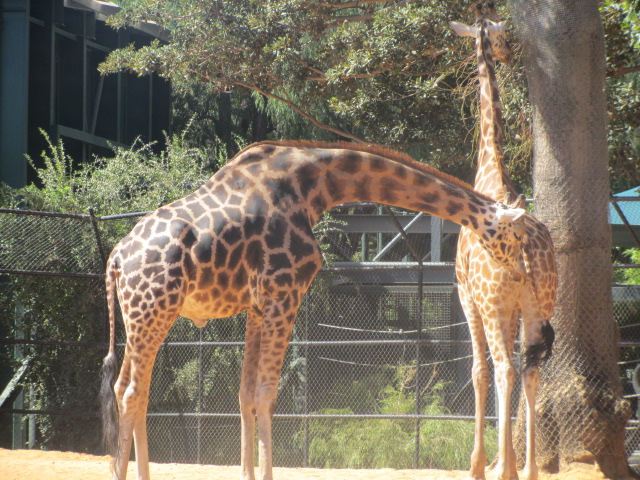 “And how about the Tiger?” asks Amanda. “Don’t tell me you want to eat it too!”

“Tigers eat people so people eat tigers,” I say, teasing her, which is unfortunately true.

Tigers hunt humans when they are no longer able to hunt other animals. Don’t be offended but, unless they’ve developed a taste for humans, we aren’t their first choice of meat. A fit, healthy tiger in the wild much prefers to kill fit, healthy deer or antelope than a fat, sluggish human being, although I don’t suggest you court one to test my theory. Due to the Chinese practise of using tiger parts as cures for an assortment of ailments, they’ve since become a critically endangered species. Even though we lack in-built, physical weaponry, we, humans, are still the greatest predators to walk the earth. 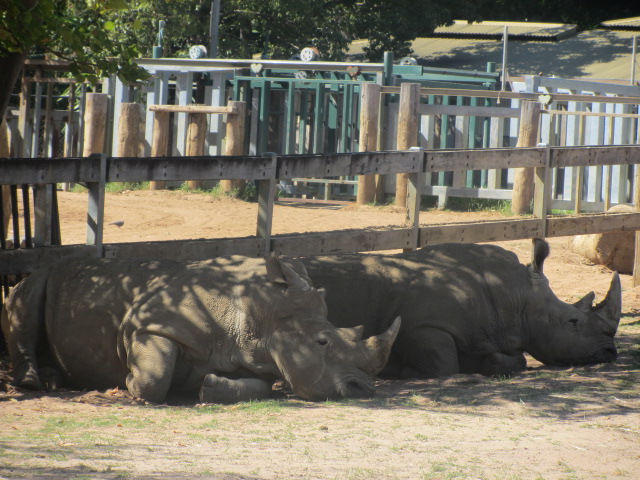 “Ok, now don’t tell me you want to eat the lizard,” says Amanda, pointing to a close relative of the iguana.

“Actually, I’ve eaten one of those,” I say, not joking. 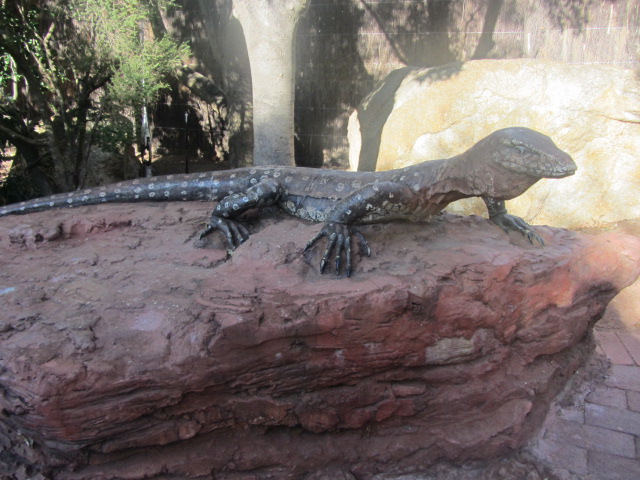 The statue looked so real, my mouth was watering. Just kidding! I didn’t want to go near the thing.

Again, in Malaysia, where iguanas are commonly found, some motorists just stop their cars to abduct these creatures for their pot. They definitely take home those run over by vehicles instead of leaving them roadside to rot. Many years ago, my mother’s friend gave her some iguana soup to try and so that evening, she fed us a chunk each for dinner. It also tasted like beef. As a matter of fact, and I don’t know if it’s God’s joke on us eat-everything buggers, but all wild meat tastes like beef. 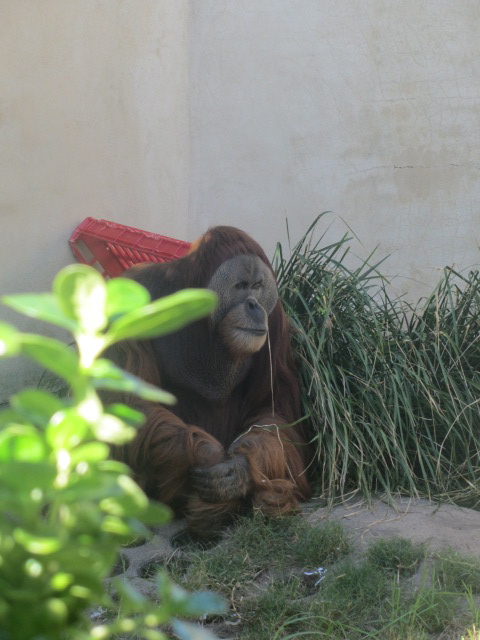 Enjoying quite time alone. A picture of a grumpy orang utan at the Perth Zoo.

“How about the snake?” asks Amanda, pointing to one in the dim-light of the night-animals enclosure.

“What about it? Chinese eat snakes too. It must taste a lot like eel.”

Eel tastes like fatty fish. I once saw this documentary about soldiers in the Singapore army, gutting and skinning a python to make a BBQ. What can I say? I’ve eclectic viewing habits. At least I know what I’ll be eating if I find myself lost in the jungle.

“How about the otters?” says Amanda, by now eyeing me with the same level of suspicion Aussies regard many of the foods originating from animals identified here.

“Don’t know. Never had one. Although I imagine sauce makes everything edible.” 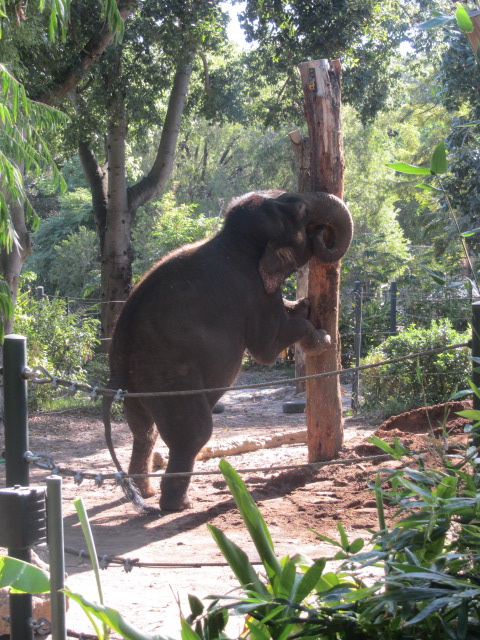 This elephant tries and tries, to no avail, to get what’s in the hanging basket. 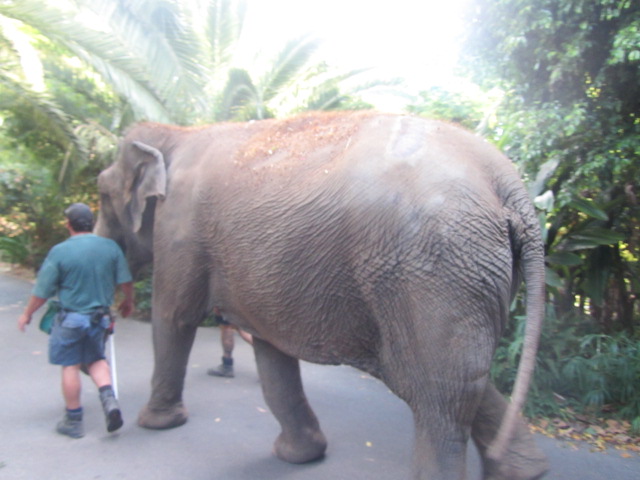 Her “promo board” says: sorry but Tricia cannot stop for photographs.

Now you needn’t worry for the animals of Perth Zoo for they are protected by high walls, high fences, and if that were not enough, security cameras on the outside to deter any would-be Chinese hot-pot enthusiast. I suggest the administrators of Perth Zoo pass out celery sticks and other vegetable crudites to Chinese visitors to help us stave off (and perhaps rewire our brains to not think of all animals as food) our meat-cravings while there. Jokes aside, Chinese do love animals and have a deep appreciation for animal conservation which is why HRH and I brought Amanda to see those big and small, furry, scaly and grizzly things that live lazy, snooze-filled days at the Perth Zoo. 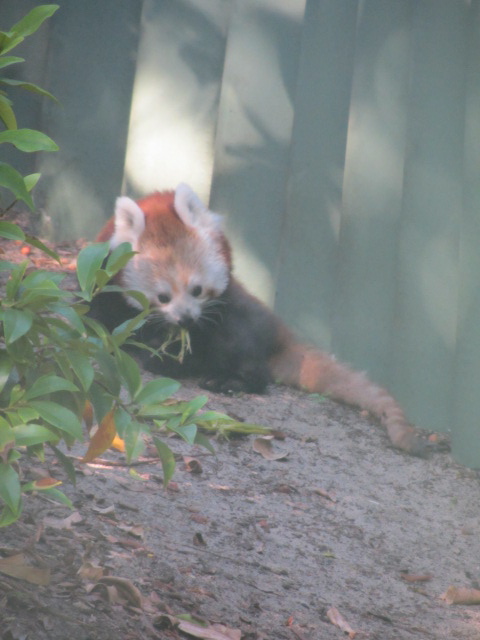 Another critically endangered animal. A picture of HRH’s beloved Red Panda at Perth’s Zoo. We spent 20 minutes at its enclosure just to snap this photo since the thing wouldn’t sit still.

2 thoughts on “Food on the Chinese mind at Perth Zoo.”